5 reasons not to buy an Oculus Quest 2 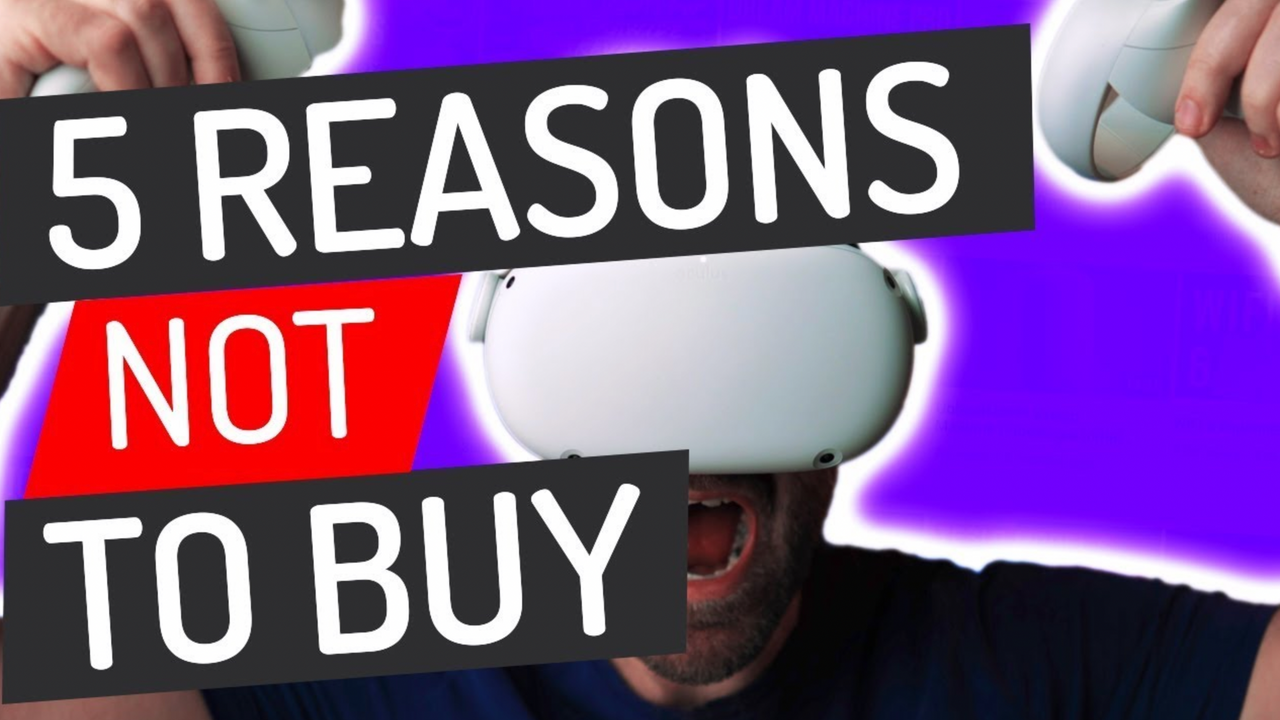 The Oculus Quest 2 was a bit of a surprise to a lot of us.

For one, it's CHEAPER than the original Quest. Did anyone else notice that?

But it also has some notable changes, niggles, if you will - that makes this headset awful in some ways.

Don't get me wrong, there are some fantastic things to like about this headset. The new near 2k graphics resolution for each eye, the 90hz refresh rate, and sheer speed that this thing opens up games and applications.

But there are tonnes of reviews already online that you can go watch to talk about all of the fluffy lovely stuff.

So here's my down to earth take, after owning the Original Oculus Quest headset, which I shot a sort of review on it in a video here . But now I have upgraded to this brand new, Oculus Quest 2, which I've had since launch day now.

If you already own a Quest 2 then I'm Interested to know if you had the same thoughts as I did so let me know, otherwise, let's crack through them...

The Straps. Previously you could adjust the straps in 3 places. One on the top, which is still there, and 2 on the side - which are not there anymore. Now you have a more awkward adjustment around the back to adjust those 2 sides. Personal preference, but I find it difficult to adjust whilst wearing it.

I don't get the eyepiece adjustment at all. On the previous model, you had a sliding thing on the bottom of the headset that slides the eyepieces closer together or further apart. Well, for the Quest 2, they've ditched the switch and instead, you have to take off the headset, and physically push the eyepieces together or further apart, and they now click into place. So you can't really get that fine adjustment that the first generation headset had.

The eyepieces fog up. Maybe this one is just me. But I use this daily for a 30-minute workout, which gets me my Vitality health insurance points that pay for my Apple Watch, Amazon prime, and a few other things. But when I exercise with this thing on, playing boxing games and then beatsaber - the lenses fog up. I've given up a number of times where I can keep on taking the headset off to clean them, but I guess my body heat is just fogging them up... it's awful.

The field of view. You know when you play some of those games where you might say, wear a helmet in-game. Your field of view gets restricted because you can see the edges of the inside of the helmet.

Now, I recently sold my original Quest so I can't actually compare now. But I don't ever recall this being a thing.

With this headset on, and in every game - I'm now more aware than ever that when my eyes look around - it hits the edge of the viewable area, and then it's just black... It kind of makes the immersion in some of the games a little lackluster at times. Particularly when I was playing games via the wireless Oculus Link like Half-Life Alyx, which is in INCREDIBLE game.

You HAVE to sign in with a Facebook account to use this thing, which wasn't a thing with the previous generation. Personally - this isn't really an issue for me, but I do know this caused uproar in the community as, of course - we all know what Facebook likes to do with our data, and not everybody has a Facebook account. So if you don't have a Facebook account, you're going to be somewhat stuck with this headset.

But there we have it.

And like I said before - there is a tonne of great things about this Quest 2.

Games from the Quest 1, work on the Quest 2 - they're just getting updated to support the higher refresh rate.

Battery life is great - considering I have the standard headset with no extra headpiece of battery.

Audio is still stunningly good considering it plays into your ears without wearing any headphones.

BUT, if directly comparing to the Quest 1 - it seems that there have been some compromises made which for me, put a slight dampener on the experience. Maybe that's why it's cheaper because there are fewer parts and assembly, but still.

Would I recommend you buy one?

Well yes - I still would. Since otherwise, that would technically be like me saying you should buy an Xbox 360 instead of the new Xbox. Because the Quest 2 is the latest tech, the latest features, it's faster, and better in many ways. For those who didn't own the Quest 1 - this thing will absolutely, 100% blow your mind.

The way how you can physically walk around in games, pick up objects from the floor and interact with the virtual environment - all of which is driven by the headset itself and some built-in cameras. Absolutely incredible.

If you did want to grab your own - here's the link - and if you did go on to buy one yourself, I'd love to know what niggles you've come across with yours.