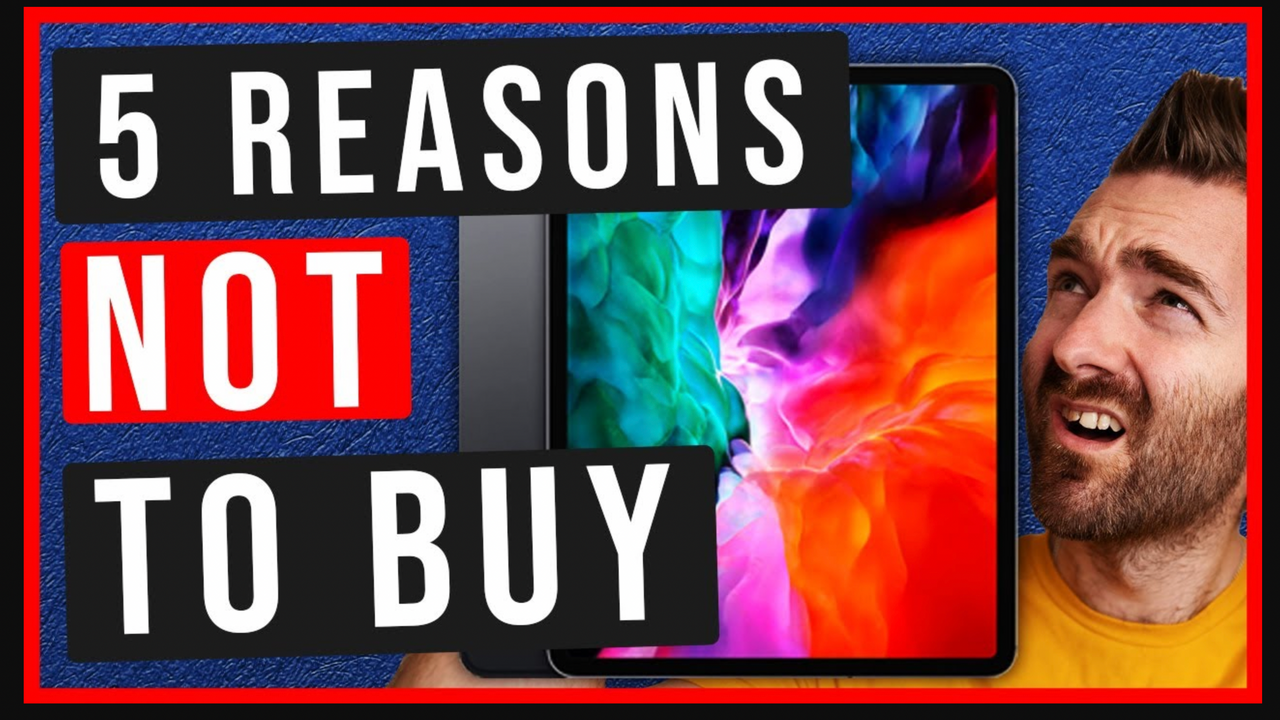 You've heard all of the announcements about how incredible the new Apple M1 Silicone chip is with all of the new range of Macs, and now you're considering getting an M1 iPad Pro, you absolute beast you.

But here are 5 reasons NOT to buy the new M1 iPad Pro - In my opinion, because whilst these things are incredible in some respects, they also significantly lack in others.

Hi, my name is Pete, and I make videos around tech, finance, and protecting your digital world. If you're looking for reviews on the latest gadgets, want to protect your AMC or Dogecoin, or just wanting to be smarter with your money - then please head over to my YouTube channel and subscribe for more.

So without beating around the bush, let's go through my top 5 reasons NOT to buy the M1 iPad Pro.

This isn't meant to piss anybody off or upset anybody who has just bought an M1 iPad Pro - because this is a really good device!

But there are a few things that you should be aware of before purchasing. This is coming from me who is, what everyone would probably call an Apple Fanboy - I own pretty much every Apple product under the sun, including the M1 Mac Mini, 2 of the M1 Macbook Airs, and the M1 iPad Pro as well as iPhones, watches and all of that stuff. So I come from a fairly well-educated Apple user perspective over the years.

And in terms of iPad. I've owned iPad Minis, the last version of the iPad Pro, and the Airs - just to set the stage properly.

Let me know your thoughts, and perhaps a little around why you would or wouldn't buy one - and please be kind! Hopefully, this won't turn into a bit of a hate-fest that the 5 reasons not to buy the Oculus Quest video turned into. Though fun fact, everybody hating on me in the comments of that video helped pay for the Oculus Quest. So, thanks!

Stick around until the end as after I've given you my top 5 reasons why NOT to buy. I'll also quickly cover why you SHOULD buy this thing, because there are a few specific cases where I would recommend it, for now.

This is arguably one of the biggest selling points of the 12.9" M1 iPad Pro.

I won't lie - the screen IS amazing. The new Liquid Retina XDR Display which has 2,596 local dimming zones is pretty spectacular, and it reaches up to 1,000 nits brightness compared to the smaller iPads 600 nits.

It's a wonder to behold. I'm sure. But on day 2 of using the iPad, you kind of just forget about it because it becomes the new norm.

You pick up the iPad and do what you want to do - and you don't spend ages gazing in awe at how incredible the screen is.

This is weird because I really thought I would be much more blown away with the display than I was. Because when the first retina displays came out on my old Macbook Pro, where you could really try and pixel peep - but couldn't see the pixels - THAT was noticeable each and every time I used the Mac and went back and forth between other machines.

But the test here is when I switch back and forth between my iPad and the M1 Macbook Air. I just don't notice the differences.

Now, I'm mostly using these for productivity. Email, web, a bit of video and music, but I am the kind of person who gets immersed in what I'm doing, rather than looking too much into the quality, if that's the right way of explaining it.

I'm the person who can look past slightly badly done graphics if there's a good story behind what I'm watching, because I get engrossed in good stories, whereas others I know will just be like "oh, this is only running in 1080 HD resolution and I can see some screen tearing". That's not me.

I think that's what I get from the iPad. I get some good use from it, but it's not because of the M1 Processor. Or the Display. It's because it's an iPad.

This thing doesn't really multitask. I mean, Apple will tell you that it multitasks, but it doesn't do it very well.

Even with their latest WWDC announcements just yesterday, where they announced a new way of multitasking in iOS, which is admittedly a step in the right direction - sure.

But it still looks clunky and doesn't work in the same way that most of us want to work when using a normal computer.

I compare this against a computer because that is kind of where we are heading with the iPad. Don't you think?

Apple has a whole range of devices with the M1 Chip and they're all capable of doing the same things. So why shouldn't they? It's only a matter of time before we see an iPad that can run the full Mac Operating System or a Mac with a touchscreen.

But multitasking right now involves awkward swiping and dragging and dropping, some apps that do, some apps that don't. Overall it's just not a very fun experience - it feels clunky and slow. But with iOS 15 which I'm going to install right after making this post, at least it's making some steps in the right direction, even though they're not quite all the way there yet.

One thing at a time.

One thing that the Apple M1 Silicone is really good at is power consumption. As I saw in my comparison of the M1 against the older Intel generations, the M1 is really, really impressive. In many cases using only a few watts of power compared to the Intel versions using upwards of 60 watts.

This means that the M1 is both powerful and really, really energy efficient. The Mac Mini I use uses barely any energy.

The M1 Macbook Air can last for up to 18 hours playing video and weirdly, less than that - 15 hours of pure web browsing. Whereas the M1 iPad Pro has - 10 hours.

For something that is pretty much the same size as a Macbook Air, it just doesn't feel like a fair comparison. You're getting nearly double the battery life from the Air as you are from the iPad Pro. And it's noticeable even when the iPad is sat on the side and not being used. I come back to it to see the battery has drained, which isn't the case with the Air which I can go days without charging, even though I use it every day.

I feel like the whole community of Apple users is waiting for Apple to merge their Mac and Mobile operating systems together, so iOS and OSX into one. They've already kind of done this, but the other way around - because on the M1 Macs you can run any iPhone or iPad app without any messing around.

But It would be incredible if I could use the full Final Cut Pro on the iPad since it's got the same processor as my M1 Mac Mini and Macbook Air, it just seems a little crazy that you have a chip with so much raw power but your kind of confined within Apples Walled Garden which is iPad.

I genuinely can't think of any iPad App which really needs that much raw power, when thinking of it as an iPad.

I CAN think of plenty of situations if it were a full laptop.

Over in the Macbook Air world - £999 buys you the base spec Macbook Air, which has double the battery life and double the storage than the iPad does. That's not even factoring in the Apple Magic Keyboard which bumps that price up to way above the cost of a Macbook Air.

So if you are buying a 12.9 inch iPad Pro and planning to get a Magic Keyboard - please enlighten me why you would choose that over a Macbook Air?

For the price of a 12.9 inch iPad Pro you could get a top-spec Macbook Air with more memory, and way more storage.

So those are 5 reasons why not, now let's stop bagging on the iPad and take a look at 3 reasons why you should get an iPad. Because in a few situations they are genuinely great.

It is of course a no-brainer if you are a creative who likes to draw or take notes - because the latest generation of Apple Pencil really is great at doing what it does. I'm definitely no artist myself but I can see what makes this attractive.

I'm not quite sure that I would use this iPad as a way to really and truthfully edit my photos, like lots of the other 'YouTubers seem to show them doing. Because I find it so much quicker to do again, on my Macbook.

But for artists or note-takers then it can be really great.

The second use case I would say the iPad works really well for us for more er, older generation folks. Though a 12.9" iPad Pro is way overkill for most people and something like the iPad Air would suit far better here - but there is a lot less stuff to go wrong on an iPad.

It's really easy to use for basic functions like checking your email, surfing the web - surfing the web! Hah. There's a sentence I've not said before. Do you remember when that's what everyone said? No Dad I can't come down for food, I'm busy surfing the web!

But yep, this thing is really easy to use even for those of us who just don't get computers.

Lastly, number 3 - and this is where it kind of fits in well for me, is the people who have been sat at a computer for most of the day, want to sit down in the evening and chill out on the sofa, watch a bit of tv, but have something bigger than a phone to scroll through their social media feeds and maybe browse a bit of web.

Now it might sound like overkill - but I genuinely do like this 12.9" form factor this time. It's something I didn't get on with before in all honesty. I bought one and returned one of this size many years ago because it just felt too big.

But my use case is mainly using this for all of the above, and I'm integrating this with some of the latest videos I'm making for my IT coaching course just to add some variation into the videos so they're not just staring at my face for each video. So I can just scribble on the screen of the iPad and it shows up on the screen like right there which I think is pretty neat - though most would probably say that's a pretty overkill purchase to be able to do that. But for me it's all of the above - it's a different device, it's slightly more comfortable than having a full laptop, even a Macbook Air on my lap in the evenings when slouching on the sofa.

So those are my 3 reasons why you might want to buy one.

Thanks for reading. See you soon. Bye.