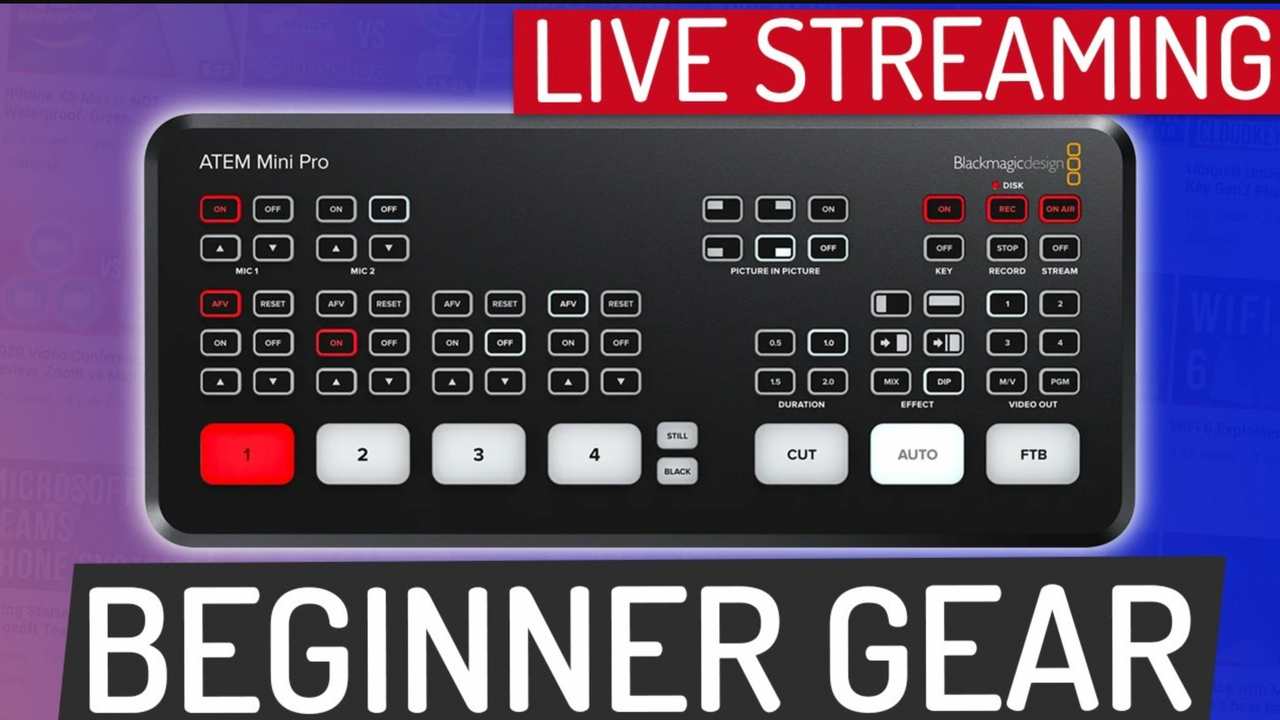 It’s been a while since I last updated my advice on what gear is the best to buy when you want to live stream.

With this post, there’s more of a business focus - as in, we’re not talking online gaming, as there is a whole range of products aimed specifically at online gamers.

So today we’re talking about what gear I would recommend if you were just starting out now and need a budget-friendly but flexible live streaming kit list.

Previously I would have recommended a camera, like the A6400 with a Sigma lens, and probably an Elgato Camlink 4K which converts the HDMI output from the camera, into a webcam for the Mac or PC.

Today though I wanted to talk about 2 new products that are far superior to my previous recommendations.

The first is the Sony ZV-1. This thing is a bit of a new vloggers dream when it comes to starting out.

You have to worry less about settings, where Sony has simplified things hugely by having settings you just turn on and off and the camera then does the clever work.

Take for example the background blur and depth of field that lots of more expensive cameras have, well Sony has made this a button. You push the button, and the background goes blurry!

It’s full of useful features like that. There’s a product showcase mode on the camera that will automatically focus on something if you hold it up to the camera.

With other cameras, you have to cover your eyes when doing it and the camera loses the eye autofocus and locks into the nearest thing instead.

Sunny also has an update coming out soon that will allow you to plug this directly into your computer via USB which will turn the camera into a webcam, so you can use this directly with Skype, Zoom, our even more complex streaming products like OBS or eCamm.

My next recommendation is a replacement for the Elgato Canlink 4K.

This has long been the only real option when you want to connect a camera via HDMI Intro to your computer. This has its issues though.

If you wanted to connect multiple cameras then you would run into issues and need to try and balance the cameras across USB busses in your computer, which for non-technical people doesn’t really make much sense.

I also repeatedly suffered issues with the cameras locking up, which would be fixed by restarting OBS.

So the replacement for Elgato is ... the Blackmagic ... this is the pro version, but also the non-pro version is huge value for money with the Camlink coming in at £100 for 1 stick.

The Blackmagic can connect in up to 4 HDMI sources, as well as 2 additional audio sources, and has a tonne of extra, more advanced features like playing media, camera transitions, and all sorts. 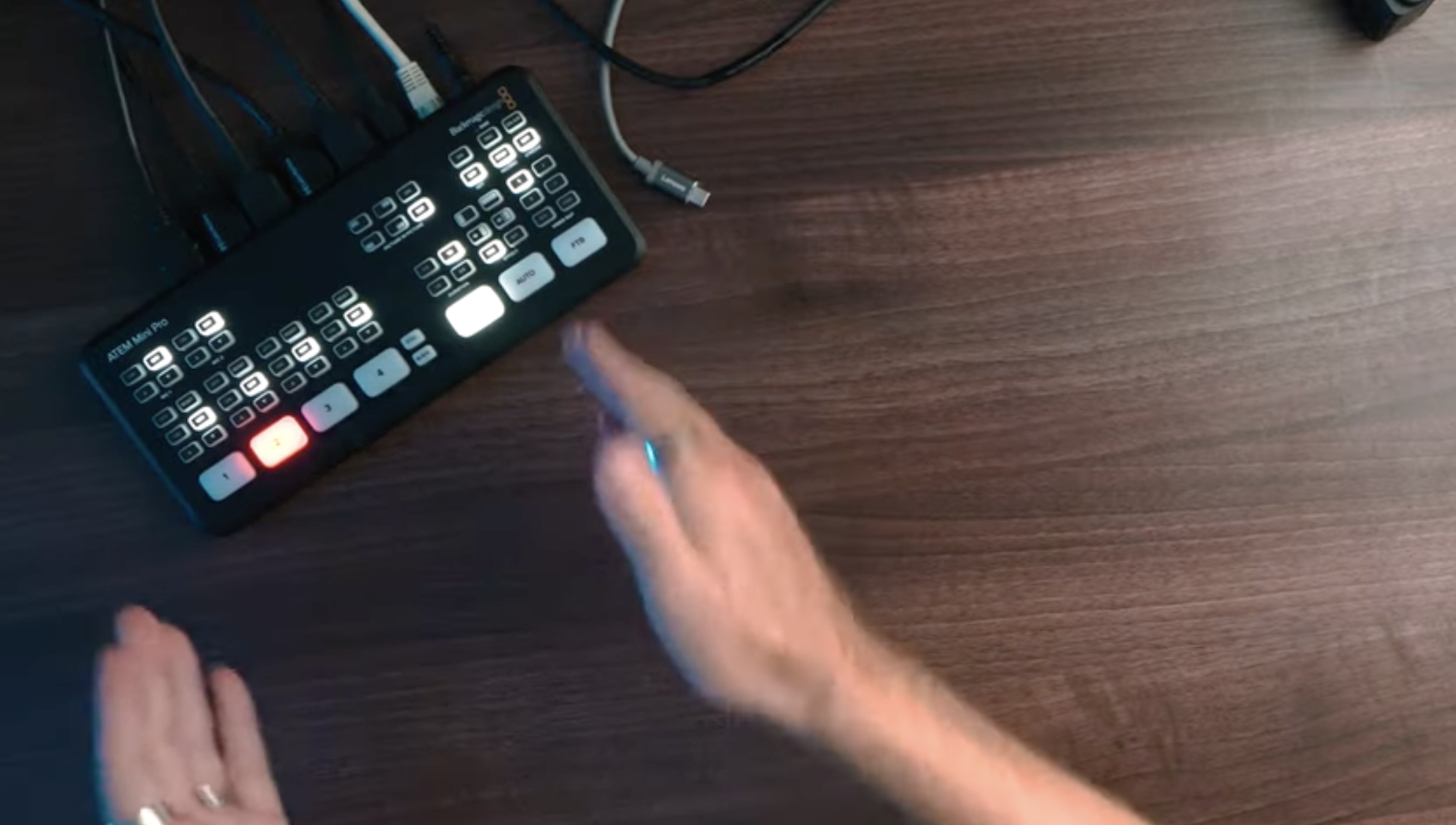 With the Blackmagic, it’s reliable and has some pretty clever things going on internally that sort out common issues Iike frame rate mismatch, audio sync issues, and so far I’m yet to experience any form of failure or issue, and I’ve had this running for well over 3 hours...

Of course, the benefit here is that the switching is all done with this device, you just tap the button and it cuts over to whichever device you connect.

I love having it here - because it’s the kind of device that you could use for interviews and be able to self-manage the camera switches, without having another person there to do it for you.

The last piece of the puzzle that I’ve changed on my recommendations, is replacing OBS with eCamm.

Now, OBS is multi-platform and eCamm is Mac only. But with OBS I had constant issues with streaming.

Every time a software update would come out, I wouldn’t install it, because I don’t know what they’ve broken.

This would be crashes, cameras freezing, the audio going slowly out of sync with the video over time - all sorts. But with eCamm there are none of those issues.

It’s reliable, easy to use, and you can still integrate it with something like restream.io to stream to multiple platforms at once.

I like that it has the ability to pull in comments directly into the stream, which just gives your live streams that little extra oomph.

Other than this, my kit recommendation is all still the same.

Same mic, same light - all of that stuff I’ll drop in the links below. And I’ve also created a Sony ZV1 Livestream kit which you can see here that has everything you’d need to get started. If you did use those links, I get a little kickback - but it doesn’t cost you anything more, so - thanks if you do.

Anyway, quick one this week.

Don’t forget to head over to my channel, like the video if you did, subscribe if you’re not already, hit the bell icon to be notified when new videos are posted. And I’ll see you in the next video.

👨🏽‍💻 Get the Live Streaming Setup: