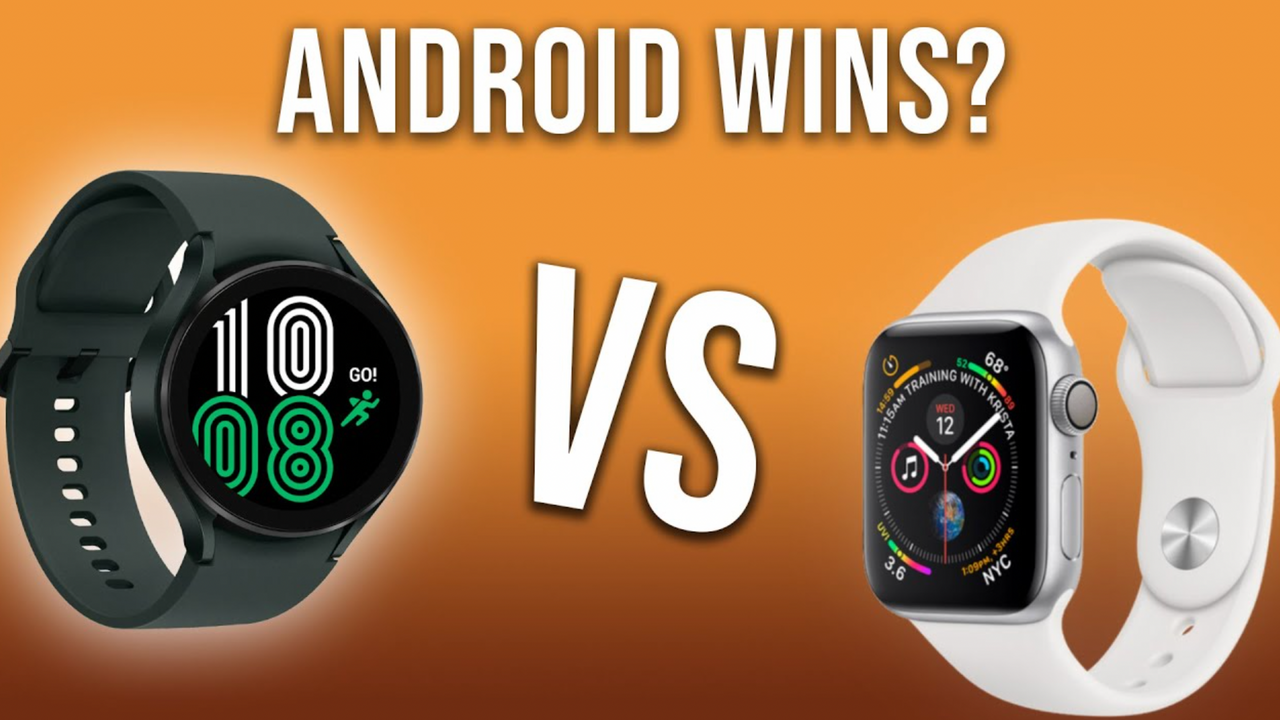 Is the Galaxy Watch 4 the first, real competitor to the Apple Watch?

I have been using both the Watch 4 and Watch 4 Classic for the last week, switching between them as I go and I have some thoughts - mostly, actually, Really positive!

So let's bite into this delicious cookie and take a look at these watches from the perspective of a hardcore Apple user who has only fairly recently started looking at switching my iPhone over to Android.

If you're new here then hi my name is Pete, and on this channel, we help busy entrepreneurs find the best tech, be productive and stay safe online.

What are the differences between the Samsung Galaxy Watch 4 and the Classic?

Well. Not much in all honesty.

The main difference is the shape, with the Classic being a bit bulkier because of the rotating Bezel, and the Classic has a slightly larger screen. Otherwise, all of the actual features are identical and all of the innards are pretty much identical and both have 16gb of internal storage for any music or podcasts you want to store locally.

I confused myself when looking to install Apps on these watches because on iPhone you install the Apps from your phone. Not so in this case, as you actually have an App store directly on the watch itself. Therefore you just swipe up on the watch, fire up the app store, and install whatever apps you want to use from there.

Because of some issues, I had with my Galaxy Fold 3, which you can learn more about by watching this video, I actually had to install Google Pay, which conveniently can also be installed from the app store. 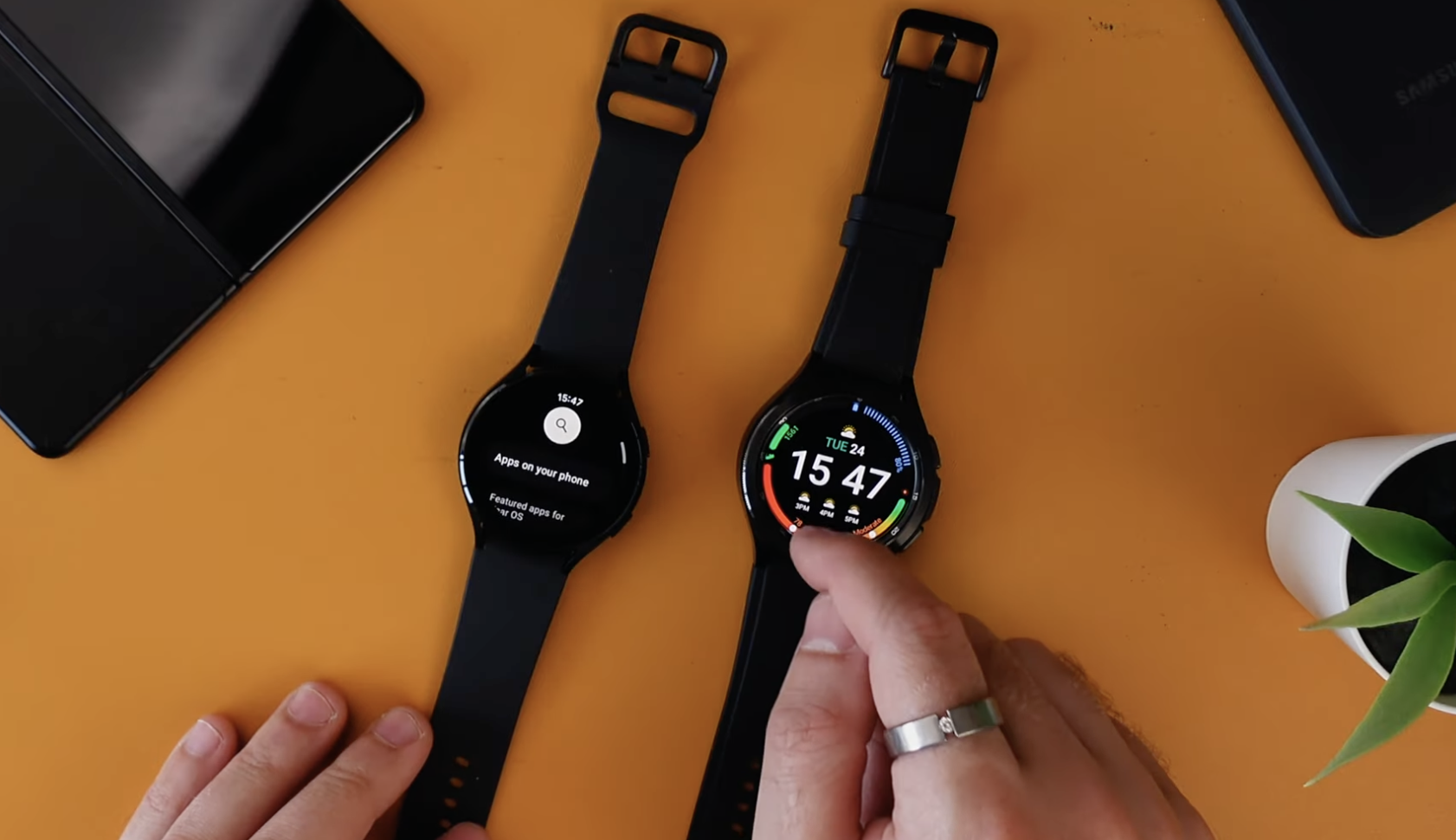 Swiping down from the top gives you quick access to all the usuals. Mute, settings, brightness, water lock, Bluetooth, all the same as the apple watch.

Tap and hold to get access to all of your different watch faces, though you might find it easier just to browse through on your phone as you get a few more options to customise each face there too.

On both watches, you can swipe in from the left to get to your notifications though on the Classic you can also just rotate the bezel and bring those up.

Always on display looks good, zero issues there and the screen does look really sharp with great image quality.

Though this brings me to I think the first negative I've got to say about this phone, and that Is that when I received a notification and raised my wrist to read it, it was fairly slow to display them. Whereas with the Apple watch I find that those notifications are much faster so you can just lift your wrist, glance, and know instantly if it's something you need to worry about.

I think perhaps this phone is waiting for the screen to be at the right angle. Whereas with the Apple Watch it seems based on the rotation of your wrist, something like that, but it does feel sluggish when first comparing against the Apple watch.

Whilst we're talking about negatives, I'd also like the ability to change the press and hold to be Google rather than Bixby. I guess this is the Samsung Galaxy watch and not the Google watch, but I still, kinda assumed it would still let you chose, though I understand that's coming soon.

For negatives - I think... I don't know if it's a negative, but this watch is bigger than the Apple watch - and it just doesn't feel as comfortable to wear. Definitely, the standard Watch 4 is nicer for me to wear, as the weight and shape of the Classic is just too bulky - but that's very much a personal opinion so each to their own!

I also think they missed a trick with most of the world still wearing masks, I would like to have seen some security features which allow you to unlock your phone whilst wearing a mask via your watch - That's a really neat feature with Apple and their ecosystem in that my watch can unlock my phone as well as my Mac, but maybe that can be rolled into a future update.

Anyway, some fun stuff - Samsung also has some pretty interesting Gesture features. You can shake your hand up and down to accept a call ......... or roll your wrist away twice to reject a call or dismiss a notification which can both look really dodgy. I think I prefer Apple's version of just covering the watch with your palm but errr, each to their own!

I have to say I'm really impressed with the health capabilities of these watches! This is personally where I feel Samsung has the edge right now over Apple. There is one feature above all else that I really dig, and this is the ability to see your average heart rate across your workout.

For those long-time viewers of my YouTube channel, you'll know I love my Vitality health insurance which gives me big discounts on some tech like the Galaxy watches, Apple watches, trainers, and all sorts, just for keeping fit. You can watch more about how that all works in this video.

With Apple, you don't know your average heart rate until you stop your workout, by which time it's too late to do anything about it. With these Galaxy Watch 4's it actually shows you a running average if you scroll right down to the bottom which is really nice and helps tell if you really need to do a few more laps to bring your average up after a workout. Or, maybe you just need to answer a few phone calls.

My last comment around health is that on a couple of occasions I was doing a workout that I know gets my heart going, but with the Galaxy watch it registered a much lower rate than normal, so I'd possibly question the accuracy around the fitness stats. But other than this, I love how you can do a quick health check from the watch which tells you some vital stats - a really neat feature.

Let's talk battery now because again, another positive. These watches seemingly last a very long time. I would actually expect to get 2 days worth of battery from one charge, which in the Apple world is a very long time. My Apple Watch lasts a day, maybe 24 hours at a push if I wore it for all 24 hours.

But the Galaxy watches are sitting comfortably around 50% in the evenings on day 1 and that really surprised me given the size of the screen, the always-on display, and the brightness I had them set to. Really nice!

So far this is the best Android watch that I've come across that actually seems to be comparable to the Apple watch. If only they'd let you use Google Assistant instead of Bixby though, that's the only real compromise and letdown here, but it's still early days, Samsung has plenty of time to produce further updates with new features and to hopefully fix that Bixby thing.

For now, head over to this link to grab yours and I'll see if I can find any discounts for anyone to use, otherwise go and watch my Galaxy Fold 3 review to see what I was talking about with being unable to use Google Pay.

Subscribe to the channel and I'll see you next time.