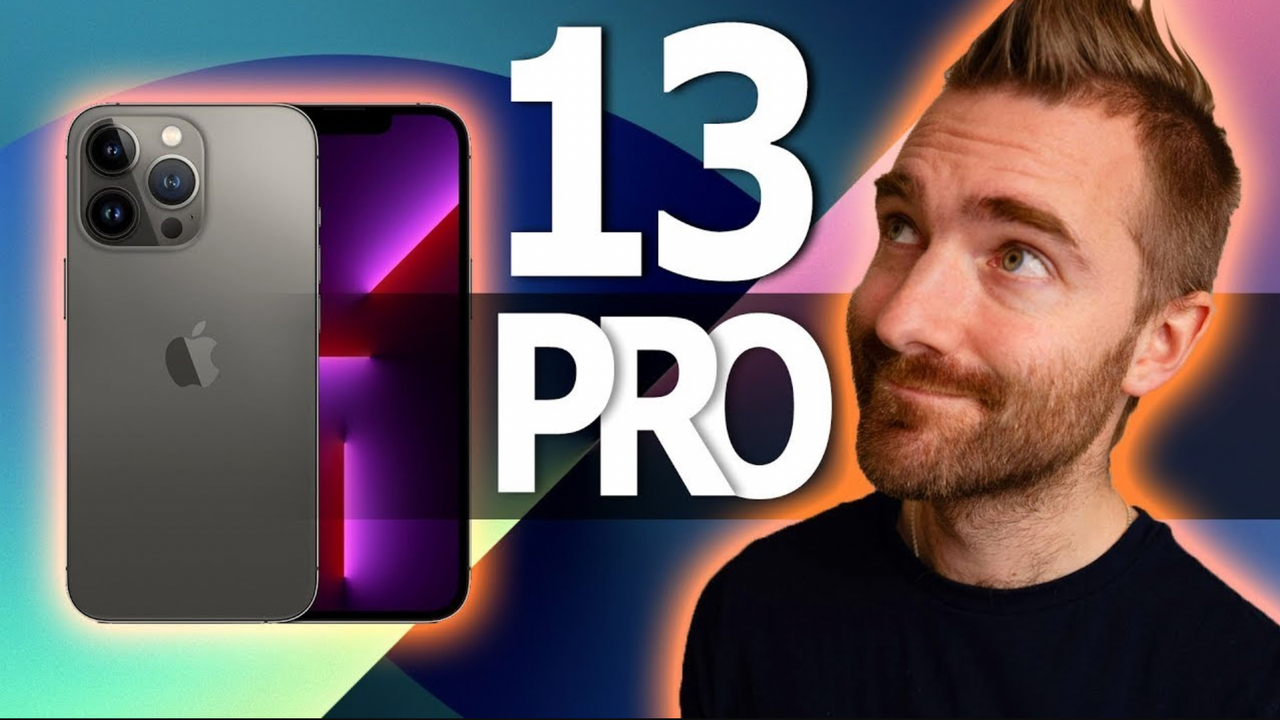 In this post we're going to talk about the iPhone 13 Pro as this I THINK it is the model out of all of these ones that I'm actually going to stick with and keep after switching from my iPhone 11 Pro Max, and to my Samsung Z Flip 3 for the last few weeks.

So for the Pro's, you have the Graphite colour, and the Sierra Blue colour. I'm a big fan of that Matte Grey colour though some say that's just a bit boring, but the Blue just didn't do it for me this year. I LOVE the Red which you can get on the non-pro's, and not a fan of the pink, but that's what my wife wanted so we've got that one for her here too. 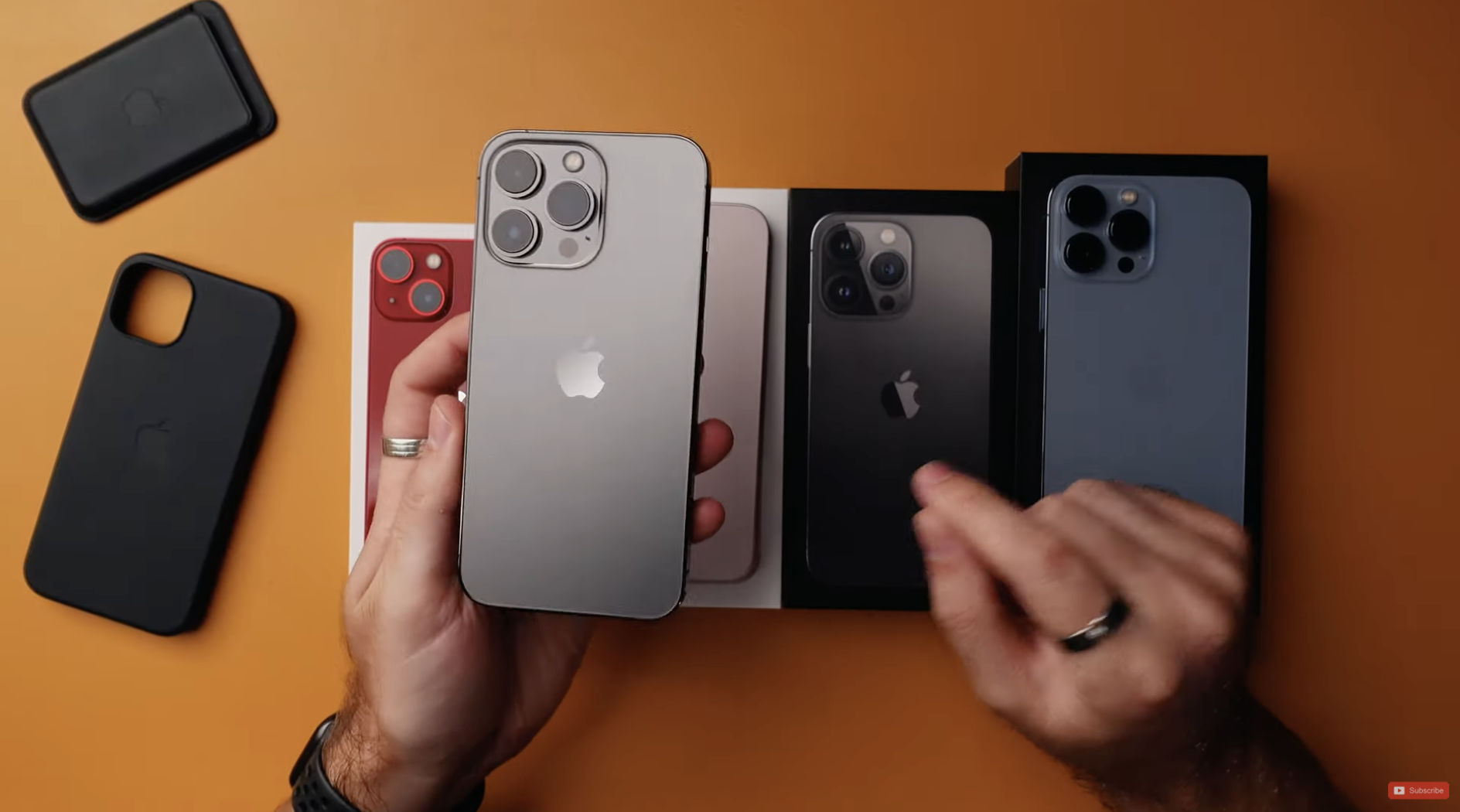 As far as switching from my 11 Pro Max, then this phone is actually a tiny bit smaller with a 6.1" screen instead of a 6.5" screen, but actually I've been enjoying the slightly smaller screen that makes it easier to use whilst not being as tiny as say the iPhone 13 Mini.

It's also fairly heavy in weight still which is good, it feels really solid but all in all this is smaller and lighter than the 11 Pro Max. All good stuff.

We of course have the new 120Hz display with the whole Pro lined up this year and whilst it's difficult to show this on camera, it really is a beautiful display. Animations look smooth and getting around is just so snappy, everything opens in an instant. But what I said in my post around the 13 Pro Max is that after a few days, maybe even a few hours of using it, the Pro Motion thing kind of fades into the background because it just becomes the new normal.

I remember when I got my first Retina Macbook Pro display and for a good few days, maybe even weeks I couldn't believe the quality and definition of that display, but it's just, what it is now. It's what we expect and what we're used to.

Yes it is noticeable when you go back to a non-pro model, but Apple have done such a good job at making iOS so fast and snappy in general that it really isn't noticeable. Which is weird, because when I've reviewed Android phones with 120hz, I've definitely noticed the difference of how smooth everything was.

For those of you wondering around the battery life, well, the 13 Pro lasts around the same, if not a little bit longer than the 11 Pro Max, even with the 120Hz display so that's a good thing because it's one reason I struggled to move away from my Pro Max because it had a really solid battery life on it.

I mean, it's no where near as good as the 13 Pro Max version, but I've been comfortably getting more than a day of solid use out of this phone so far. My days are long from around 6am to Midnight each day, and even with my 11 I was getting low battery warnings when going to bed, but I'm yet to see that from the 13 Pro.

Switching to a slightly smaller phone, and this being my first Magsafe phone, I actually decided to pick up a magsafe wallet this time which has been nice to semi-drop my final 'other item in my pocket' which was my wallet. With the Magsafe I actually found that I left it attached most of the time, so now I literally just carry my phone in my pocket and that's basically it. No keys and a wallet that's pretty much glued to the phone with a pretty strong magnet.

Nothing to compare it to from the 12's, I heard a few stories around the wallet falling off. But I've not experienced that at all so far. Even with a case on, it's still a strong magnet.

Screen wise we have 1000 nits max brightness over 800 for all the other non-pro models so you'll be able to see it in bright environments better.

The notch is 20% smaller, but Apple really need to fix this issue with the status bar at the top. Rather than using the extra space for something useful, they've just made everything bigger... Which kind of sucks, but hopefully that's something that can be fixed in an update so we can get back the Battery % that every review I've watched seems to mention. 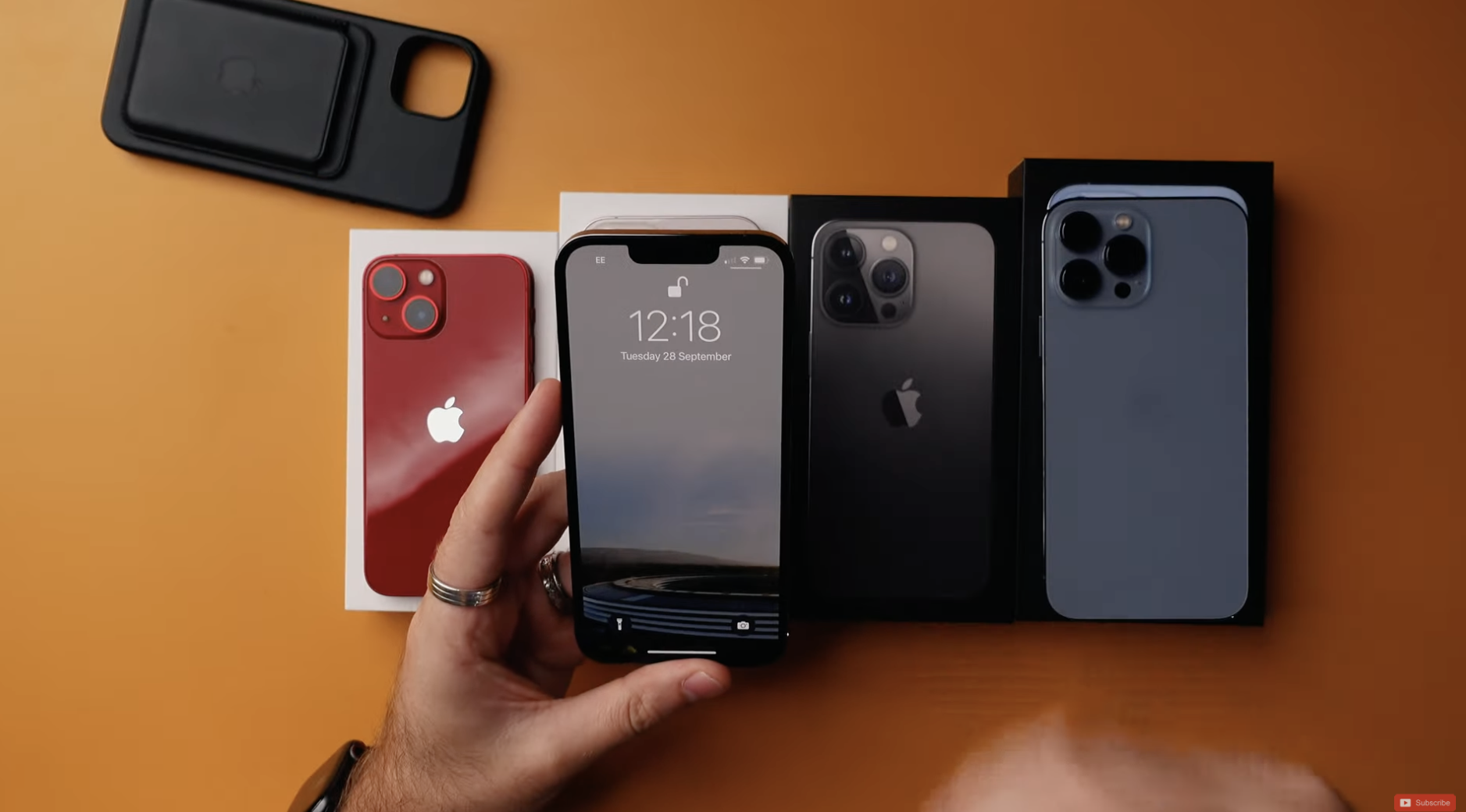 But other than that, everything else seems to be sized properly.

Speaking of size, the camera bumps, are way, way bigger than the 11 Pro Max that I had before, it's kind of comical. It still wobbles if you place it on the desk and tap on anything except the opposite corner, but with bigger cameras comes better image quality.

Now with the Pro line up you get an Ultrawide, Wide and 3x telephoto, and the photos themselves are by far some of the best that I've seen come out of a phone before. I mentioned it in my Pro Max review, but they are definitely one of if not the best cameras on a phone that you can buy today.

That's the same for Video, which looks absolutely stunning, and if you are someone who likes to film more than they take photos, then any phone from the 13 lineup will do you good. If you don't need the 3x telephoto lens then you can even get the cheapest 13 Mini and still get photos and video that is just as good as the 13 Pro Max range.

With the new 13's we also have Cinematic mode, otherwise called Soap Opera Mode, because whilst it's unfortunately locked at 30fps which is what all soaps are shot in, and also locked to 1080p, the videos taken in this mode are pretty good considering it's all in a tiny camera body.

Yes it's not perfect and you do see some inconsistencies around hairlines and the edge where it's trying to determine where the blur should be applied, but the fact you can adjust all of this after you have shot a video - is just a crazy feature to have!

So whilst Apple may be way behind the curve with the likes of 120Hz and still missing USB C - it's good to see innovations like this coming through the post Steve Jobs era. And to be fair to them, as a first attempt it's very impressive and will be interesting to see what comes with the second or third generations.

What could be better?

Well, like I mentioned - USB C would be a welcome addition. Faster charging too like the OnePlus 9 Pro would be amazing, and I think that's probably it right now other than a few minor comments on the accessories. It would be nicer to fit in 4 cards into the Apple wallet instead of just 3 - and I'll be making a video hopefully soon around the other accessories I'm using. I'm just testing a few out right now as well as waiting for the new Apple watch accessories to drop, so if you liked this post then subscribe to my channel for some more Apple and Android content as well as some fun tech stuff - and I'll see your smiling faces in the next one - Cheers!