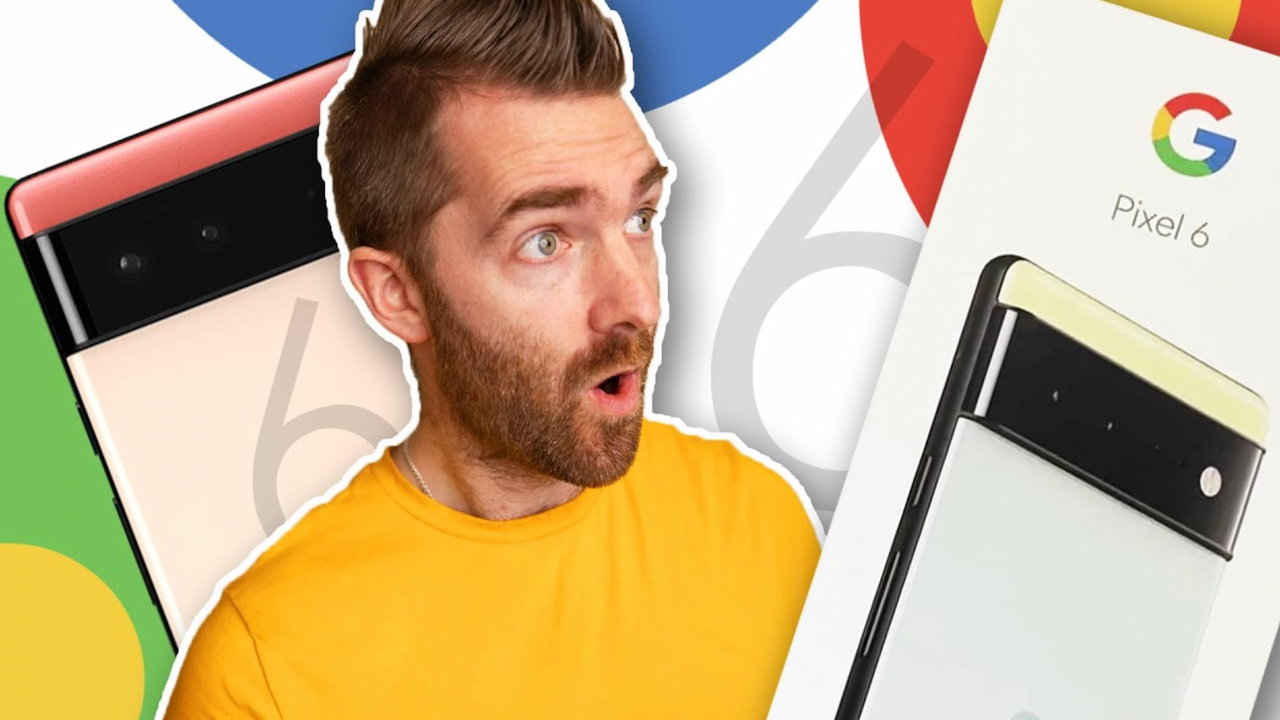 Wow OK, so the Google Pixel 6 event just happened, and here are my thoughts from someone who has been really, really excited by this phone launch and this phone. Could this really be the phone that makes me switch away from my iPhone?

Now I tried to stay away from all of the leaks, of which there were many - so watching the Pixel event was quite an interesting experience as they seemed to gloss over a lot of the hardware itself, perhaps because they just assume it's been leaked? But I had a good read of the specs pages and also found some interesting notes down the bottom in the small text - so let's jump into it, and if you're new here and interested in learning more from an iPhone user who might just be about to switch to Android, then a cheeky subscribe would be amazing.

Without further ado, we have 2 new phones from Google. Hardware-wise, they come in 2 different flavours, the 6, and the 6 Pro. From looking over the specs, other than the obvious size differences, the only other differences are that the Pro has 12Gb of memory instead of 8, the addition of a 48Mp telephoto lens and an upgraded front camera.

That's it - that's the differences.

Pricing wise it's $599 for the 6 and $899 for the 6 Pro, so a $300 difference to get the upgraded hardware. But, if you pre-order today, you also get to claim some Bose 700 headphones, which are around £300's worth in themselves. Though I predict a LOT of Bose 700 headphones will appear on eBay very soon and so you might be better off holding on to those headphones, for now, maybe the resale price will go back up again once the rush has dissipated.

Camera's were by far the biggest focus for Google at this event. They're one of the areas where we're expecting big things and particularly compared to the latest iPhone 13.

We've got a 50Mp wide lens, a 12Mp ultrawide and on the Pro, a 48Mp telephoto lens with 4x optical zoom. Compare that to Apple, and you're only getting 12MP on all cameras, and those extra megapixels means you can take a lot more, higher quality photos which means you can crop much further without seeing a noticeable degradation in picture quality.

Lastly, the 6 Pro also has a 4k Front-facing camera which is really nice to see!

Now combine all of this with the software features which we'll talk about in a moment, and that sets the tone that the camera system on the Pixel 6 and the 6 Pro, really could be the best of the best.

That's the camera, what else?

We've got a 90hz display on 6 and 120Hz on the Pro and a similar ProMotion feature that ramps up and down from 120 to 10Hz to extend battery life.

Speaking of battery life - this is one thing I came across when looking through the specs that weren't mentioned in the presentation, that I know of.

According to the specs, the battery in both the 6 and 6 Pro will last beyond 24 hours, and up to 48 hours with Extreme battery saver... both with caveats, so let's check out what those are.

'Average battery life tested was 34 hours with a mix of talk, data, standby and other features.

Of course, caveated with - actual battery life may be lower.

If these stats are real-world stats, then this could be just as good, if not better than the iPhone 13 Pro Max, but available across all of the Pixel 6 handsets and not just the most expensive. So that's something I'm looking forward to testing out when I get my hands on one.

We're also getting 30w fast charging on USB-C, and 23W wirelessly with a new fast-charging dock which as of yet, you can't buy.

It isn't up to the standards I have seen on other leading phones like the OnePlus 9 Pro, but compared to the iPhone which has 20w wired and 15w wireless it's still a good improvement.

Then again, with the improvements in battery life, charging speed actually becomes much less of a priority in a phone. So there's that to think about.

Another disappointing thing I see both in Apple and in the new Pixel is if you scroll to the bottom of their page with all of the small print, terms and conditions, whilst the Pixel 6 is IP68 rated - water damage is not covered by warranty.

I can kind of understand why, to a certain extent. Because over time the seals can get weaker and perish and then let water in.

But to have a blanket rule that a phone is IP68 rated, which means you can withstand submersion up to 1.5m underwater for up to 30 minutes, but not cover water damage under warranty, just seems a little unfair. You might as well tell people that it's splash-proof, oh and by the way, you might get away with dunking it underwater.

So that's the hardware, let's talk about features - because arguably the clever stuff with Google is actually in the features!

Starting with the camera because again, it's one of the biggest focuses on this phone.

You've got natural skin tones, which I have to say when comparing against my friends S21 Ultra to my iPhone 13 - they really did need to do something about getting natural skin tones across the board, and I'm also glad to see that it's being more inclusive by doing so.

There's the Magic Erasor feature that uses AI to remove other people from a photo which is mind-blowingly clever to be able to have that feature within a phone, I think it's one of those features that I don't really feel is going to be a huge thing to me personally, but probably will once I actually get my hands on one and start taking photos with it.

Face Unblur is also an interesting feature that stops those blurry photos you take, normally they happen when there's not enough light, but the other use case of adding blur to a photo means you can get some really arty shots which actually, look kinda good. Not something you'd always want, but I can see this getting some really unique shots.

There's a partnership or integration with Snapchat, I think it was tap to snap. Tap the back twice - though I normally end up disabling those back tap shortcuts because I find they just miss-trigger all the time - so I'll be interested to see how well that works. Also - who uses Snapchat still? Does Google own Snapchat? I think I'm probably far too old to know these answers... Let me know down below!

Oh and one more photo feature that I haven't come across before - Locked Folder. From a quick bit of Googling, this seems to be a better version of the 'hidden' photos over on iPhone. To keep all your kitty cat pictures away from prying eyes. Neat.

You've got some huge improvements to the video features, again - really excited to try out all of those since the iPhone is by far the best at video right now, but, maybe not anymore!

The only other feature was their use of computational photography to get up to 20x Super Res zoom - I just wonder how noisy and horrible those photos will be at 20x zoom because so far, nothing I've seen can really come close to a true optical zoom - so time will tell.

Another incredible feature that I've not seen before is Live Translations, which will be insane for those who travel. Just imagine being able to hold a conversation with somebody who speaks a foreign language and have this device sat in the middle translating - it's like star trek or, star wars or... Jedi stuff! haha.

I found it interesting that they were talking about extending the support window for updates - not really anything I've ever heard from an Apple announcement but from what I gather, one of the downsides of Android phones is that manufacturers only ever provide software and security updates for a limited time after the phone launches. With the Pixel 6, this has been extended to 5 YEARS, which sounds very generous. I don't think I know anyone that's kept a phone for more than 5 years nowadays so that should cover the vast majority of people who upgrade say, every other year or so.

Pixel 6 also has an Always-on Display - it's one feature I really WISH the iPhone would have. The fact they can have an Always On Display but still have up to 2 days of battery life - crazy good!

Voice features now and WOW is this clever!

It's contextual and remembers previous corrections so you don't need to constantly correct things when dictating a text message or email. I WISH, iPhone would let you do this with their ridiculous UK which ALWAYS, ALWAYS autocorrects to U.K.

I think that will genuinely make a big difference when texting and perhaps I might be able to send and reply to messages just by voice and without touching the phone - since we all know that usually, it's a case of either a tonne of mistakes or having to manually go back by hand and correct them.

Call Screening is a feature I saw at a Google presentation years ago and have always admired from a distance over in the Apple ecosystem. I guess perhaps it's how Google people feel when they see the Apple integration which I don't think Google has done as well, not yet anyway.

But I'm looking forward to experiencing this in person.

Google Assistants Integration with Google my Business to show busy periods is a nice feature, and the fact you can use Google Assistant to stay in line and queue for you whilst only tapping prompts on screen for option 1 or 2 and so forth - THAT is damn clever. REALLY clever.

Though I remember seeing a feature in a previous launch where Google Assistant would call up and make a reservation, or book a hair appointment for you - is that still a thing?

Overall, it was a really interesting presentation. Not quite as polished as Apple's, I didn't quite find myself getting as excited as I did for Apple's event, but that's probably because I'm a bit of an Apple nerd.

One thing I will say about the overall experience though is the Pre-Order experience? Sheesh - that was a bad, very bad experience and one I hope Google will learn from. But Google shouldn't need to learn - because they're google!

Essentially, you could pre-order the Pixel 6 as soon as the live stream started, but the site kept crashing. Then over the next 2 1/2 hours, I kept trying to buy.

It seems that Google was trying to limit the number of orders on their systems, perhaps to prevent the crashes, by just pausing the inventory from time to time. Which explains why phones would come and go in and out of stock multiple times through the time it took me to order one.

With that said, let me know if you managed to get one, and which one. I did eventually manage to snag the one I wanted. A 6 Pro in Black, just 128Gb as all of my stuff is stored in the cloud - and I am really excited to give this a try. Make sure you're subscribed to my channel to get my take. I'll be posting a first impressions video when I get it and then a full review 2 weeks later, so be sure to stick around for that.

Otherwise thanks for reading - check out a couple of other videos you might like, and until next time - see you soon. Seeya.

🎥 Lifelong iPhone User Switches to The Google Pixel 4a: https://youtu.be/L0145jwrwkI