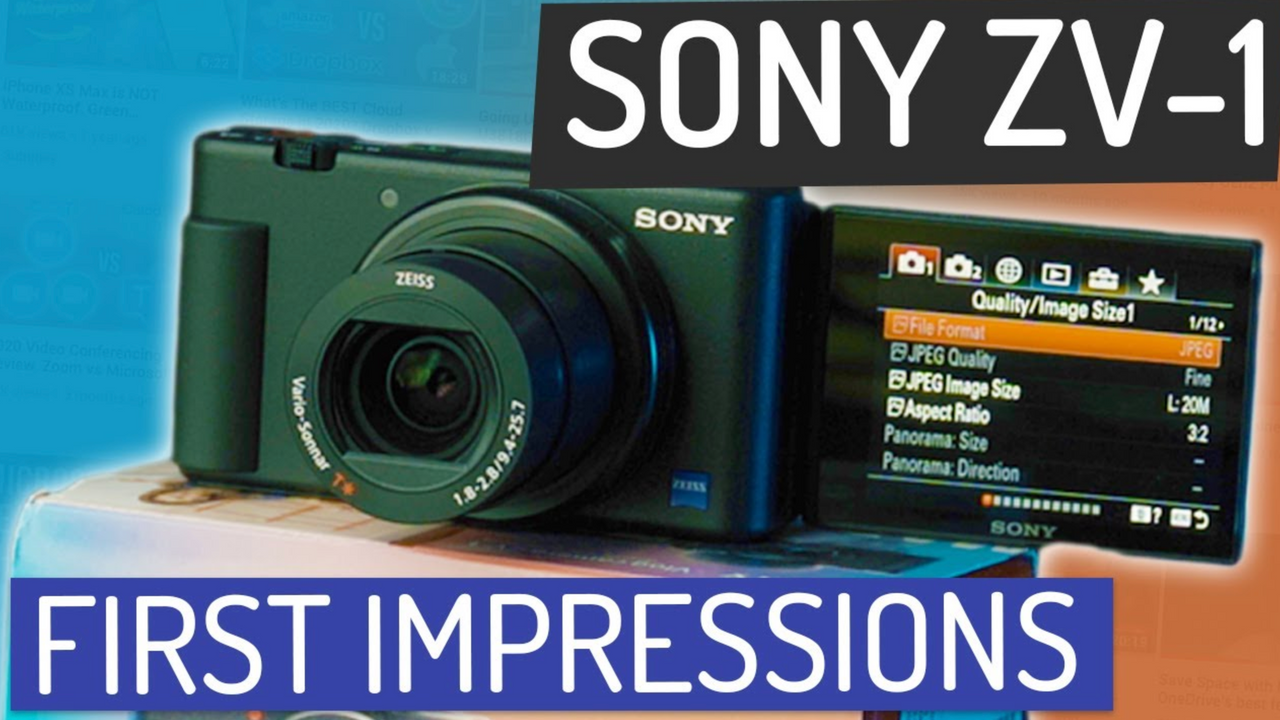 Today we’re taking a look at this tiny little camera, the Sony ZV-1, which is quite possibly THE best camera for vloggers, for streaming online when you want to up your game from just a crappy webcam, and for people who want to start and get into great shots...

So let’s talk about it.

If you are just starting out with video, or want a quick, compact, and easy camera to use to create really great quality content, then this camera is perfect for you.

Before this single camera that was launched just a few weeks ago, you would have needed to also buy a camera body, a lens, a microphone, and maybe even a monitor.

What if I tell you, that you could replace all of that stuff, with just this one camera? The Sony ZV-1.

The camera has an impressive list of features and tech specs - it’s the first camera of its kind where Sony has actually listened to their customers. Literally, ask anyone creating content what their list of wants would be in a camera, and this would be, pretty much, what you get.

You have a 20-70mm lens, with a 1.8 to 2.8 aperture, which basically means that it’s wide enough to get your face in, and it will give you that nice background blur that you only see in higher-end cameras.

The built-in microphone absolutely kills and truly performs even in windy environments when using the included mini dead cat - but of course, if you are shooting video but stood back, then a separate mic is always better.

It also has a flip-out screen! Something which has been requested of Sony for years! I always wondered why Sony didn’t do this, and it's taken them so long I wondered if Canon had patented the design where it flips to the right, kinda like Ford patent the heated front windscreen so no other cars but ford have heating elements in the screen?

Another great feature - built-in ND Filter! So you don’t have to walk around with something extra and screw this to the front and fiddle with getting it right. You can assign that to one of the function buttons to instantly flip it on when you head outside in the bright sunshine.

It also has a feature that is coming soon via a software update, which will allow the camera to be used as a webcam, so you can really up the quality of your zoom calls!

in terms of features of the actual camera, there are some great strengths to both vloggers who are out and about, and for people shooting in one place like I do.

There’s an LED on the front so you know when it’s recording - I’ve always wondered why it wasn’t included on cameras before!

There is a product mode that will near-instantly focus on anything you hold up to the camera, for when you may be reviewing products, and then face detection for the rest of the time.

There’s also a mode that blurs the background in your videos, which you get on higher-end cameras with lenses with a low f stop number. Essentially, the lower the f stop, the quicker the background will lose focus and thus blur.

What actually happens, is that when you change the f stop number to be smaller, the lens is opening up to take in all of the light. This normally means your footage will then be blown out, so you would then perhaps adjust the ISO to compensate or add an ND filter, which is essentially sunglasses for your camera.

So there are all of these things happening with a typical camera, but in the VZ-1, this happens instantly ... there’s pretty much no noticeable change in image, other than the background - THAT is impressive.

First off - being a point-and-shoot camera, the battery is quite small. It will generally last around 1 hour 10 minutes of filming in 4k with autofocus and on a single charge. Though it's worth mentioning that you can power this via USB, so if you have a portable USB charger, or want to plug directly into the mains - you can, fairly indefinitely... but you have to have the battery installed for it.

Also, it overheats. This is a notorious issue for pretty much all Sony cameras, even my more expensive A6400 and A7III have that issue. On the ZV-1 this means that you may only get 5 minutes of recording time before it shuts off due to overheating BUT there is a fix for this. Go into the settings menu and change the auto power-off temperature to high then it pretty much carries on, and on, and doesn't even really get that hot. I've left mine running in a room, which is around 22-25 degrees and it recorded for 2 hours straight because that filled up the SD card, which I then formatted and recorded for another 2 hours before filling it again. Therefore the temperature really isn't an issue, but I've seen a lot of reviews saying how awful this camera is because they didn't know about this setting...

Sticking loosely with the battery, as the battery and SD card sits behind the battery door - which is actually part of the thread to mount it to a tripod. So you'll have to take the camera off from the tripod first, then grab your SD card, then mount it back on again.

Lastly, my only other real complaint is that when you are using this camera for live streaming in 4K and want to stream at 30p, you lose face detection. Instead, you'll have to drop the camera down to 24p to get that option back. The alternative here would be to drop down to 1080p which can stream in 30p with face detection, or look to use an external recorder to work around that issue.

Why is this an issue? Well because places like YouTube stream at 30p, so if you stream in anything less than that, then it will look juddery - so 30p is the way to go...

Overall - I think for the audience it's intended for - those starting in video, who are vlogging out and about and want a simple, small and light camera - it's well worth considering.

Once you really get into video then you will still want to upgrade to a model with interchangeable lenses to give you more creative control.

But for me - this does provide a lot of features for a significantly reduced price tag when you factor in the cost of a body, a lens, mic, and ND filter for alternatives.

For me - I think I'll be testing this out a little more with some actual old-style vlogs, purely for the fact that it will make them so much easier to shoot instead of carrying around a much larger and more awkward setup for out and about...

I'd say that's a recommendation from me for the ZV-1 for today!

Thanks for reading, don't forget to head over to my channel and like the video, if you did, subscribe if you're not already, hit the bell icon to be notified when new videos are posted - and I'll see you in the next one.

👨🏽‍💻 Or view the whole ZV-1 Starter Kit that I've put together: https://kit.co/petematheson/sony-zv-1...