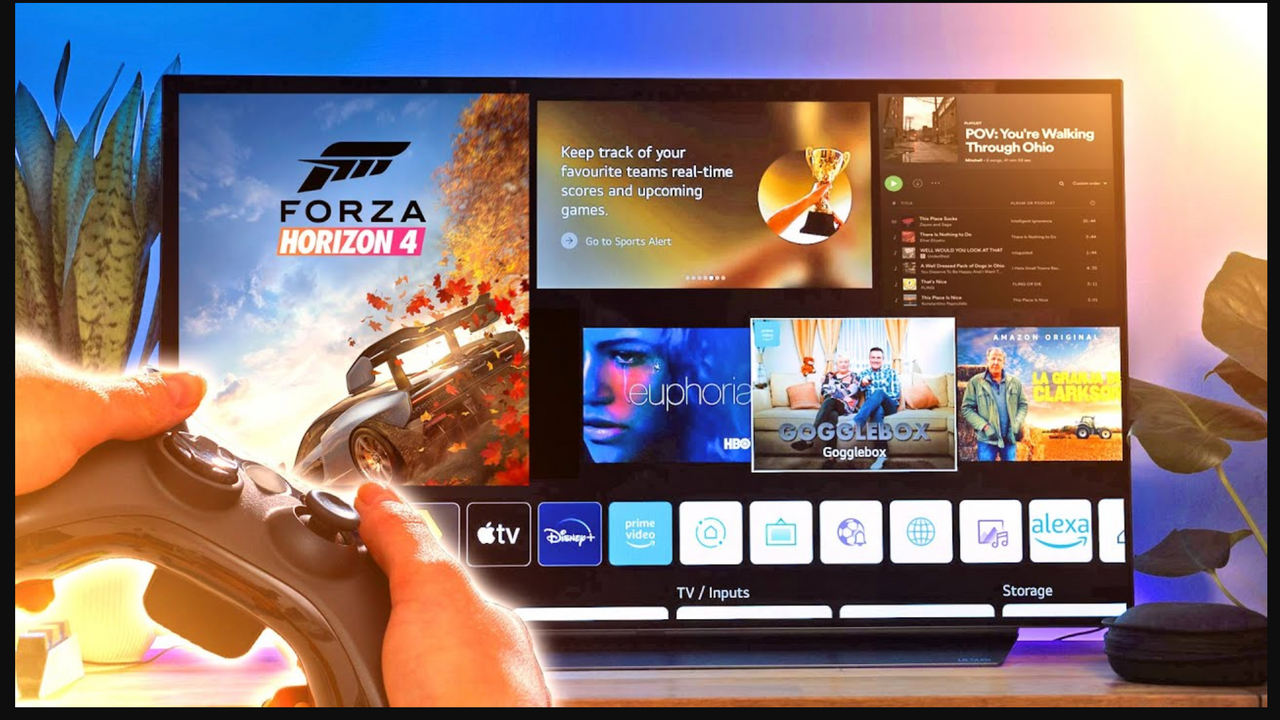 If you're here, then hi my name is Pete, and on this website, we help busy entrepreneurs find the best tech, be productive and stay safe online.

Since switching from my Series X to a PS5, I've also been looking at how to get the very best out of the console, and this TV? Well, this TV really delivers.

This TV is the 48" Model, but does also come in 4 other sizes. 55, 65, 77, and 83 - but, we don't all have upwards of 4 grand to spend on the larger model, and personally I found the 48" and 55" Models to be very reasonably priced when you consider the features, which are the same across all of those different sizes. So, here goes.

Firstly, it's an OLED Display - which means each tiny pixel can turn on and off independently. Which, to you and me, means that it provides near-perfect blacks with no halo effects like you see on all other types of display.

This OLED Tech makes a massive difference in dark scenes in movies and in gaming, and there are also some cool features of the new processor here which reduces any noise and improves the contrast and saturation on the screen.

It also supports Dolby Atmos and Dolby Vision, and that again makes a massive difference with high-quality content from the likes of Netflix, Disney, and Apple.

The TV also features 4 HDMI all of which are 2.1 Ports and it means all of them can support up to 120hz refresh rates, which is great for those of you who have been lucky enough to find both a PS5 and Series X. One of those ports also supports ARC via HDMI which you'll need if using an external soundbar like the Sonos Beam.

In terms of gaming content, since getting the TV and since having the PS5, I've played all sorts of games from Racing, Shooting, Platform and I have to say that they all look absolutely stunning on this TV when compared to my old 2015 TV, which wasn't a bad TV. It was still a reasonable 4K Model at the time we bought it.

A really cool feature is with some of the games the TV supports a feature called VRR, (Variable Refresh Rate) and 120 frames per second. So for games like Call of Duty, it sits there solidly at full 120Hz and 4K, which looks incredible. For the Xbox Series X and games like Forza Horizon then VRR will allow the LG C1 to match the refresh rate of the console which you can see in some scenes when it switches from scene to scene and overall makes the game look and perform so much better. This also has G-Sync and Freesync which all in all means you'll get better image quality, better colours, and won't be plagued with things like screen tear.

The LG C1 also has a feature called ALLM, Auto Low Latency Mode which basically detects the console when it's switched on and immediately switches to Game Mode so you don't have to go through all the menus to find it and enable it on each input -  to the point where if you decide to watch a movie on a game console whilst in Game mode, it will automatically detect this and switch game mode off again. Clever stuff.

Running through the settings quickly, the 2021 LG C1 has a new Game Optimiser, which isn't something I've seen on any other TV I've personally used.

The TV lets you set some specific modes for First Person Shooter, RPG, or RTS - and basically these modes just bump the colours slightly, for example, the FPS just boosts the shadows slightly so you can see people in the dark better.

Otherwise, you can play with the Blacks, Whites, you can turn the OLED Motion Pro which does LOOK smooth, but it affects the input lag, so not something I'd personally use. You have settings for reducing the blue light for when playing before going to bed, which just makes things look very yellow like on your mobile phone. There's a boost option for input lag, but this also disables some features on the TV, including Motion Pro.

AI Sound can be enabled, though if you are using a soundbar or headphones then this isn't needed. Finally you have VRR, G-Sync, and FreeSync settings, all worth having enabled, and then finally adjustment over the Dark Areas. All of these settings combine just give you a really, really good-looking, fast, and responsive gaming experience. This is just incredible - and it's so difficult to get across even if you watch my YouTube video as YouTube will do all of its compression, and then you have the device that you're watching the video on.

I have to say that going from what was a fairly good 4k, Curved, 48" TV which we also have in the 55" Model for our Living Room because we liked them so much - This LG C1, 48" 4K, Dolby Vision, 120hz behemoth is a huge step up when it comes to gaming content.

It doesn't stop at just gaming content, because whilst I don't watch any live TV, I have been known to binge-watch the odd show and catch up on Movies on the likes of Netflix, Disney, Amazon Prime, Apple TV, and of course YouTube.

All I have to say here is that the experience when watching not just the ultra-high-quality content but even the standard definition content, the TV just does an excellent job. Given that this is an OLED Panel, you still benefit from the deep contrast between the blacks and brighter areas and the processor does a great job at boosting the colour to make it look better. But of course, you will get the very best out of this when watching that really high quality, 4K, HDR, and Ultra HDR with Dolby Vision. Well, I wish you could just see for yourself because even my video won't do it justice.

For all of those Apps like Apple TV and Netflix, traditionally I would load up my 4K Amazon Fire Stick, but I've actually preferred using the Apps directly on the TV this time around, and the remote control is quite nice. Not as small as I'd like it to be - I haven't used the number keys on a remote control for years now, but it's got handy keys to quickly access Netflix, Prime, and Disney, as well as Google and Alexa voice control. You can also point the tv and use it as a mouse with the on-screen controls, and it even passes this through to some gaming consoles too.

Something else I haven't touched on yet is that the viewing angles on the TV are the best you can get. Not an issue for me in the room I'm using it, but in our living room, it would be a massive improvement over the curved screen, because you can get all the way to the side without any change in colour.

Whilst we're at it, this is also the thinnest display that I've ever seen. It's thinner than my phone and my iPad. So if you are mounting it to the wall then it's going to look really nice.

One thing that I have noticed is when going from a curved screen and back to a flat screen, is that the reflections are actually much better.

Ideally speaking you wouldn't put the TV directly in front of a window -because when it's light outside, you can get a reflection of the window. However, once the TV is on, even on a bright day it's much less of an issue than with my previous TV.

All in all, this TV has all of the headline, top-spec features that I could want in a TV. Image quality looks just incredible on Playstation, Xbox, and all of the streaming services that I've tried. I guess the next step for the future would be say, a 240Hz screen like my 49" Curved Samsung G9 Monitor?

Here is a link that comes with the best prices I can find. If you liked this post, head over to my channel and subscribe if you want more content like this. Otherwise, thanks for reading!