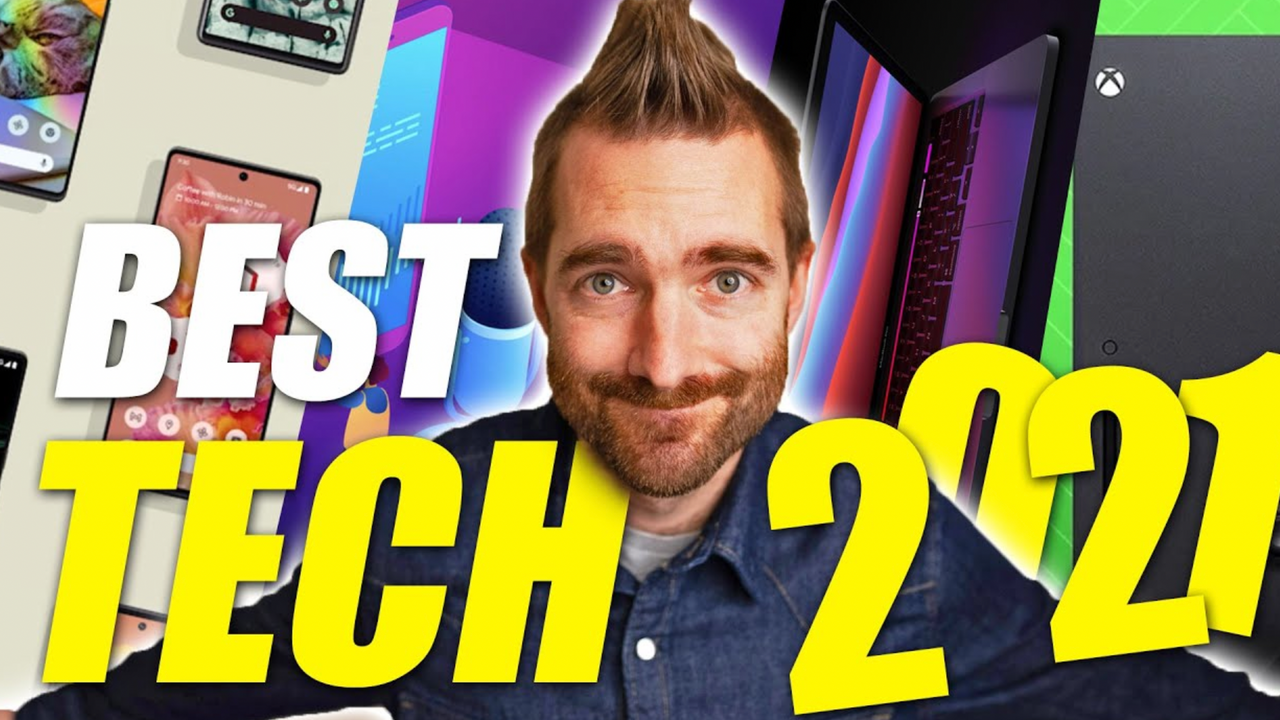 Welcome back to the website, my name is Pete and in this post, we're going to run down my 5 pieces of favourite tech from this year - because whilst we have been stuck inside for much of this year, and chip shortages are still a thing - there has also been some incredible tech released.

So without further adu, let's dive into my first favourite piece of tech from this year and if you like anything I mention, I'll throw some links down below just in case you are one of those last-minute shoppers needing some inspiration.

First up, let's talk Apple. Actually my favourite tech this year isn't anything to do with the iPhone, or iPad, or the Watch. It's actually their new M1, M1X and M1 Pro ranges of computers.

To this day, I am still amazed that I can now buy a Macbook Air - which traditionally has always been massively underpowered just so they can say that it's the smallest and lightest laptop available.

But this year, the game totally changed with the new M1 Chips.

I legitimately traded UP, from my £3,500 16" Macbook Pro which was one of the highest spec Macbook Pro's you could buy last year, and replaced it with a Macbook Air which costs around a third of the Macbook Pro.

If you are using a Mac that doesn't have the new M1 Chip, seriously. Upgrade. The performance is mind-blowing, particularly when you factor in that none of these chips consumes anywhere near as much power as the Intel or AMD equivalents.

That goes for the newer M1X and M1 Pro chips too - in fact, Intel responded with new chips boasting better performance but forgot to mention that they use way, waaaay more power to do so. And when you're working off the battery, that's a huge difference.

The only reason I haven't upgraded to the M1X or M1 Pro chips is that my M1 Mac Mini and M1 Macbook Air's, honestly, are SO good at what they do already, that I have no need to actually upgrade.

Next up on my Best Tech for 2021 is the Google Pixel 6 Pro. After playing around with Android this past year with so many different phones including the Pixel 4a, 5, the Galaxy Fold 2, the Flip 2, OnePlus 9 Pro, Samsung S21, Poco F3 SO MANY PHONES.

But the Pixel stands out to me, as an iPhone user, because it's one that's been entirely made by Google - the hardware, the software - yes of course the components inside might not be Google, but that's no different to Samsung or LG making the screen for the iPhone 13.

Yes it has its quirks, mostly due to it being Android 12 which is a brand new OS, it's a little buggy. But I love some of the features on this that you just can't get in IOS.

The biggest feature by far is voice dictation. You can legitimately use your voice to dictate messages, and they translate accurately with proper punctuation, emoji's, and you can send them quickly with no delay. Compare that to iPhone, and it gets it wrong 90% of the time, and there's a delay when you have to wait for it to respond back with what it thinks you've written and then 'Would you like to send it?'

I have switched back to my iPhone just for a couple of weeks. I'm waiting on a new case, the Latercase, and I also picked up the new Galaxy Watch 4 on Black Friday along with a nice 20% discount thanks to my Vitality health insurance - so I'll be able to swap back over and use the full Ecosystem, so to speak with the Watch and Phone together once again - really excited for that.

Now I have the Pixel 6 Pro. But the Pixel 6 at £599 is a stunning phone. If you're in the market for a new phone, and you haven't got the money for a Flagship - well. That's a flagship right there for half the price that others are going for.

Other's that I've been really enjoying this year are the Galaxy Flip and the Galaxy Fold 2's - which were really interesting devices. Though honestly after some time of using both of them, they just felt a little gimmicky. I saw a video from Linus Tech Tips recently who still has the Fold 2 as his main phone, and he said he uses the front screen around 90% of the time, and the front screen is tiny. It's not great for 1 handed use. The flip was also really good and interesting, and it's very satisfying to flip open and close - but beyond that, I found it's just not for me.

That's not to say they're bad phones - they're just not a good fit for me.

The OnePlus 9 is also really interesting, mainly around its fast charging because that pretty much wipes away any form of anxiety around how long the battery will last, considering you can charge it so quickly.

But yeah, for me, the Pixel 6 is probably the runaway winner in terms of the best phone of the year. And that's coming from me, who has and still continues using Apple Products every year.

Because the thing that I and many other Apple users are starting to see now is just this lack of innovation. Nothing really new is coming through. It's the same phone, slightly faster and slightly better, but nothing revolutionary. Whereas you have these Android devices coming out with some really whacky features lately - so I'm looking forward to continuing to explore those features next year.

One piece of tech that I've not really mentioned in any of my videos, and I don't pay anywhere near as much attention to it as I should because it is SO MUCH FUN to play with - is my Home Automation system.

This year I actually switched away from what I'd been using for a very long time, Indigo - which was this Mac-only home automation system. It was an App you ran, and it could basically talk to all of the smart devices in my house. But as time went on, it didn't get updated that often, it wouldn't support newer devices, and I even enquired about investing in the product at one stage, because it was SO good and had so much potential - if we hired some full-time developers then I really think it could be something.

BUT I ended up switching to Home Assistant. Probably the biggest, most widely used FREE home automation platform there is.

You can run it on anything, a Raspberry Pi, Linux, and I've actually got mine running on my QNAP NAS Drive but it is SO good.

Using Home Assistant, it literally talks to everything it can. My lights, heating, security, CCTV, location, it has integrations with Google Assistant, Alexa and Apple Homekit, so I can literally control my whole house with voice - particularly with me switching phones so often it's nice that I don't need to worry if I'm on Siri today and then Google tomorrow.

The only thing I don't like is that some things can be a little overly complicated compared to the older system I used to use. Sometimes you do have to figure out some coding, but for any techies reading this, just give it a try.

For me, I have it just doing some basic things for me - and whenever I have a bit of spare time I'll log in and play around, and set up some random automation just to make our lives a bit easier. But it's so fun and kind of addictive, I just wish I had more time to play with it. Maybe let me know in the comments below if you want to know more about my home automation setup - it's not something I've ever really thought about making a post about, but if there's interest then I will - so yeah.

Next on my list has been something that's saved my sanity this year and throughout this, seemingly never ending Covid thing. And that is my Gaming Setup.

I play this, literally every single night.

Now I've been fortunate enough this year to pick up both the Xbox Series X and the PS5.

My kids play on the PS5 and I love the PS5 too, but for me, it's been the Xbox Series X. And mainly I think it's come down to the controller for me.

Amazing for games like Call of Duty when you want to ping something whilst you're still aiming around - and since that's been what we've played for the last year now. It's become second nature to me. Whereas the PS5 controller I think is more technologically advanced, the Xbox just feels more natural and comfortable to use.

Also, the Steelseries 9X, hands down the best headset that I've used of all time. Crystal clear audio. I'm told the Mic sounds really clear, especially when I switched between other headsets like the official Xbox Headset or the official PS5 Headset. I only wish they had USB C, since pretty much all of my gadgets, except the iPhone, have made that switch already.

The last part of the gaming setup, is the 48" LG C1 TV which is a crystal clear, bright, colourful beast that runs at 120Hz. The image quality on this screen is incredible. It makes low definition stuff look great, and high definition is just WOW. Watch something in 4k HDR and it blows everything else out of the water.

So all in all, the Xbox or PS5, depending on your flavour, the Elite Controller, the SteelSeries Headset and the LG C1 TV have made for such a fun gaming experience this year, so it's going to be interesting to see what that looks like next year.

Speaking of screens, the other bit of favourite tech to give it a quick mention is the Samsung G9 Neo. An absolute behemoth of a 49" Ultrawide, 1000R Curved Screen with Quantum Mini LED - yes it's expensive at the best part of $2k or $2.5k depending on which country you're in - But these did come up on Black Friday discount already, so that means you might be able to snag one of these at a discount if you keep your eyes peeled.

Ever since switching from my dual screens, to a 38" Ultrawide, to a 49" Dell screen, then to the original G9 and now this G9 Neo. Things are only getting better each time. It's such a fantastic piece of kit and to anyone who is still using multiple monitors, just try switching to a single Ultrawide - it makes a huge difference. You get to reclaim that lost piece of space that you give up by having the screens join in the middle.

It's a very niche product I know, but if you are looking to buy multiple high quality 4K screens, then definitely consider something like this as well - rather than spending the same amount on multiple screens, you could get just one giant screen instead. And given that it runs up to 240Hz, well, it's not going to be a bottleneck for you anytime soon - in the meantime, you can spend the money upgrading your PC instead.

So there is my best tech for 2021. I'd love to know what your best and favourite tech from this year is down in the comments below.

Head over and subscribe to the channel if you want some more tech content - I have a tonne planned for next year.

Otherwise, go watch my Pixel 6 Review Here, the Apple M1 Review Here. Or, one of the other videos - and I'll see you in the next one!

🛒 Get your Google Pixel 6 Here: https://geni.us/p0CqYwN