Trying to leave the Apple Ecosystem... 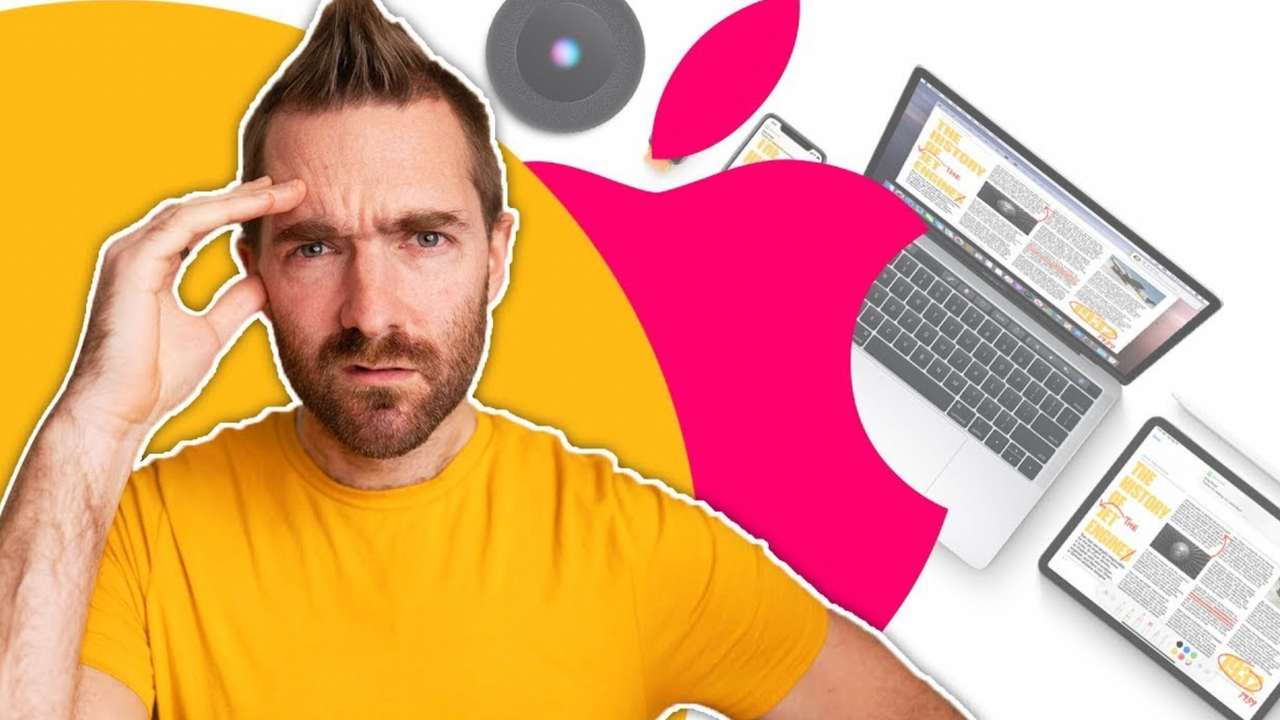 If you're thinking of leaving the Apple ecosystem but think it's impossible to switch or leave, and you're stuck or worried about what you'll lose when switching away, then this post is just for you.

Hi, my name is Pete, hope you're doing well - come for the tech and stay for the insanely bad Andrei Jikh references.

Anyway, last year I had this niggling obsession with trying to move away from being a lifelong iPhone user with my iPhone, Watch, Macs, and everything else in between - to an Android user.

Over the years and years of being an iPhone user, things have just felt a bit stale.

So, I started playing with Android phones, and right now, I have tried 9 different Android phones and recently I've kind of settled on the Google Pixel 6, which isn't perfect by any means, but it's pretty good.

Over those phones, I've learned how to pull away from SOME of the Apple ecosystem, so in this post, I'm going to show you how you can also plan your exit from the Ecosystem along with some caveats along the way, and some things that you just can't fix just yet.

Full disclosure first - I'm just a regular guy, who has been using Android on and off for around 6 months to a year. I'm still learning as I go along, so let me know down below in the comments if there are better ways of what I've personally come across and what works for me.

HOW TO SWITCH SUCCESSFULLY

So first up, let's talk about a couple of quick wins before we dig into one of the big ones when switching to Android. Let's start with Photos, and this is a really simple one. Use Google Photos. I actually did this anyway, even when I just had an iPhone, as it was a really great way to backup my photos and videos, outside of the Apple iCloud system. So if anything ever got lost, hacked, or deleted, I still had a copy somewhere else.

You just install the app, enable backup, and wait for a few days whilst ALL of your iCloud photos get uploaded to Google.

Then, when you switch to Google, you simply install Google photos, enable back up again, and you now have all of your iPhone photos easily accessible on your Android phone.

I'm actually due to make my 2022 version of the best apps to store your photos and videos whilst factoring in how much storage you get for the price, so if you want to see that one then go find the Subscribe button on my channel for that one when it comes out.

Next up, let's talk airdrop, and let me introduce you to a very similarly-named service - called Snapdrop.

Just visit snapdrop.net on any device and you now have airdrop but across ANY device. It's really cool!

For Android, you can install the Snapdrop app, and then when you go to share something you just tap snapdrop, then tap on the device you want to drop your files to.

It works really well, I've not run into any issues with it, so that's a quick and easy one to fix.

Now let's talk about the big one, and that is definitely what she said, and the reason that most Apple users state as to why they can NEVER move away from iPhone, and one I also struggled with, and that is - iMessage.

But Pete, all of my family and friends are on iMessage! It's so convenient! I don't want to be a green bubble.

And to that, I say. Ah, Gesundheit.

Because what I actually found out after switching, was that most people, even iPhone users, are already using other messaging apps.

I'm sure if you checked your own phone, you are probably guilty as charged, of having more than iMessage installed. Facebook Messenger, or WhatsApp, or Signal, or Telegram, or Snapchat, or just, all of them.

For most people, it was just way more convenient to move them all to a more, platform-independent messaging app. For me here in the UK - that has mostly been WhatsApp, which works just fine as long as you don't switch phones all the time like some idiots around here.

But Pete, WhatsApp isn't secure, they can read my messages, they can see my cat photos!

If you are worried about that, then I'd recommend looking at Signal - which so far seems to come out as the most highly ranked, and most secure cross-platform messaging app out there. So if you want to send those saucy pictures to your partner, Signal is statistically a better place for it.

Though, joking aside, please remember that if you do send any photos or videos via Signal or other secure apps, the recipient can still save them onto their phone and do whatever they want with them. So stay safe out there.

For those of you who are tied to the Apple iMessage ecosystem platform, then there is still hope! An app called Beeper launched earlier this year, and I was fortunate enough to be one of the first to use it. And when I say fortunate I mean that I paid over 100 bucks for an annual subscription - but Beeper is genuinely a magical app that can basically let you send iMessages from your Android phone. I made a video talking all about that which you can see here.

But in summary. iMessages - not as big of a problem as I first thought.

Kind of related to airdrop, what about universal copy and paste between Mac and Android? Because whilst I might be ready to switch away from iPhone, I'm not yet ready to switch to Windows... not yet... maybe comment if you want me to try that out IRL.

The best I've come across is an app called ClipPaste, which honestly - isn't as seamless as Apple's built-in ecosystem of just simply copying anything on any device, and instantly being able to paste it on any other device. But it gets halfway there.

On Android, you copy something, text, or media, then open the Clip Paste app up, so it can store what you've copied into the App.

Then head over to your desktop where you can also open up the app, click copy, and now you can paste it into your app.

It's definitely not as clean, it's not an Apples to Apples, version - but it's the best you can do with the technology we have right now.

Siri is also one that some people get tied to. Though, after another recent video where I compared the voice assistants on this Pixel 6 Pro vs Siri on my iPhone 13 Pro, well. Google blows Siri out of the water. I'm sorry. It just does.

It also doesn't tie you into all of the Apple Ecosystem like Apple's own Homepod speakers, which is a really big plus for me.

If you have Homekit devices, then you can use Google Home to replicate much of what Apple's HomeKit can do, though I'll be honest as I don't specifically use Google Home or Apple Homekit - all I do is connect both of those to my Home Assistant system which is my Home Automation system, and then it doesn't matter what device I use, I can control stuff around my house! But from my limited use so far, it's pretty like for like.

And now we get to a couple of issues. Because it's not all strawberries and perfume over here in the Google world.

There are 2, key issues that I see when switching over to Android.

First up, is Facetime. Because I am yet to come across anything as good as Facetime for Android. And when I say for Android, I mean cross-platform. Because what we're looking for here is a way for you to communicate with people, no matter what platforms they're on.

WhatsApp video, Facebook Video, all of the other video apps out there - not great. Poor quality and reliability in my experience and whilst your own experience may be Okay, mine certainly hasn't been.

Unlike iMessage where others will typically already have another messaging app installed, they're not as likely to have a video calling app installed - like Google Meet, which, in all honesty, does actually work quite well.

But just try explaining to your 80-year-old Nan how to download, install and use Google meet when Facetime has been designed to be so simple to use, that it's just a few taps away.

The next issue is App Development - because still for some reason, I find Apps tend to come out on iPhone before they hit Android.

Given that Android has a pretty loose policy for letting people develop and allow people to install apps, that's a bit surprising to me, given that Android apparently has a 73% market share.

But I would imagine that the reason for this is because Apple's current iPhone lineup is just 5 models, each of which has its own variants in sizes.

Whereas according to an old survey from Open Signal back in 2015, Android could have over 25,000 unique Android devices, and chances are that 6 years on from this, it's likely to be way more than even that crazy statistic. Even within brands, there are just an insane number of devices and sub-devices that each brand has.

They go on to show this even further when you look at how many different software versions are typically in use by Apple and Android users, with Android users typically being much slower to upgrading, or unable to upgrade due to lack of support, and also the size of the screen Android developers have to cater for compared to Apple being way higher, due to the sheer number of devices.

And so whether it's the next Clubhouse or not, developers typically design for Apple first. It's a big market, with plenty of users, and they make it easier for developers to create apps that work across all of their devices.

Now if I've missed anything from this post please do let me know in the comments below, I'd love to know more so I can get better at this, try it out, and make better videos and posts.

So thank you so much for reading, subscribe if you aren't already, I post on Wednesdays and Saturdays and I'd really love it if you went to watch one of these 2 videos next, as it really helps me out, and I'll see you sooner than you might think.