What the Tech is Google Workspace? 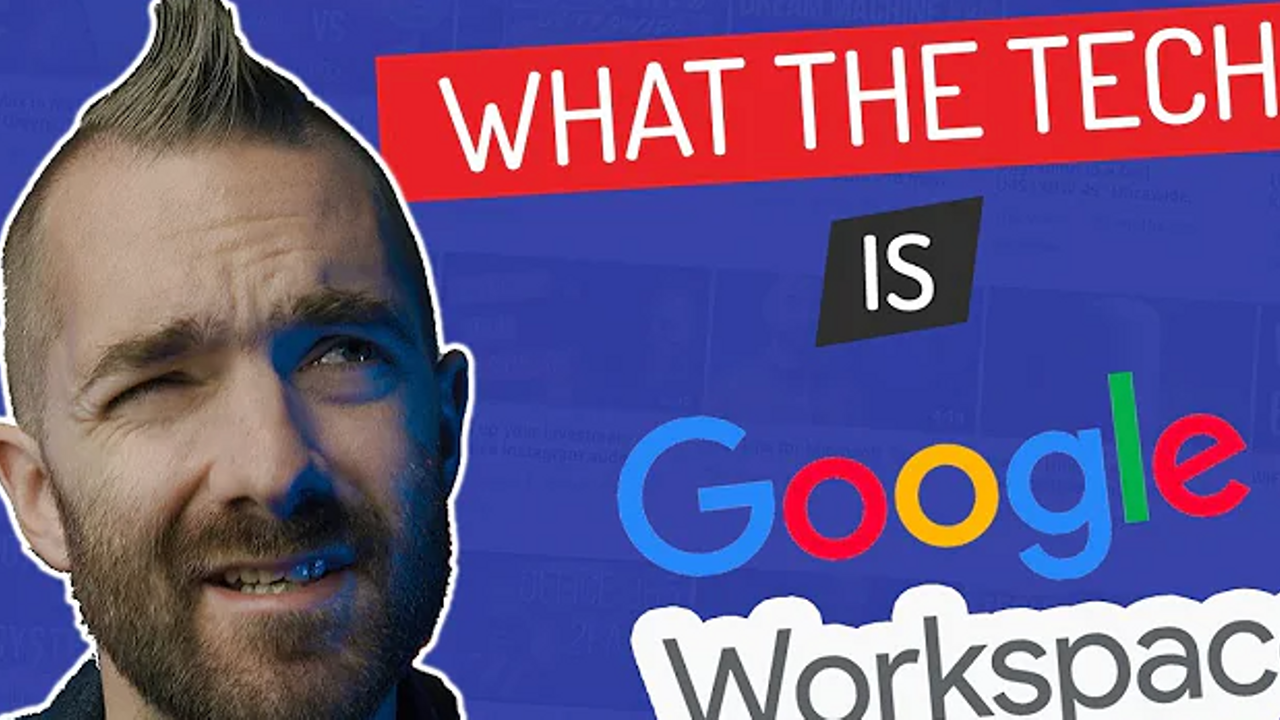 You know, my job would be so much easier if people stopped changing things.

But then, if they didn't change anything - I wouldn't have as much content to make.

So here we are once again, and this time it's Google who are the culprits.

Yes, that's right - in typical Google fashion, more so than Microsoft actually, they have pulled the rug out from underneath what was formerly known as GSuite, which was Google's Business plan, package, product - whatever you call it.

Instead, they've replaced it with a new name, Workspace!

Unlike Microsoft, they have not only renamed GSuite to Workspace, but they've also made significant changes to their plans which has a dramatic impact on specifically, storage and pricing.

Welcome back to yet another post, and I guess this is actually going to be a 'What the tech' post - because, seriously. Google. What the tech!?

In October 2020, Google rebranded the product suite known as GSuite, and launched the new service called Google Workspace. I'm going to cover what these changes mean.

Admittedly, this was a bit of a hack, since Googles official stance was that you needed a minimum of 5 users for unlimited storage - but from my own experience, and looking around the web - it's obvious that Google has never enforced this limit.

Well, in Google Workspace, the unlimited storage tier is no longer an option.

Previously, on their Google GSuite Business plans, you had Unlimited storage, which provided immense value in comparison to everything else on the market. So much so that I most definitely crowned Google as my favourite online storage provider both for general Cloud Storage and Photo storage video's.

This is most definitely something that's caused a bit of an uproar amongst the community . Since the initial announcement stated that existing GSuite subscriptions wouldn't be affected. It now seems that users are being invited individually to transition, and will likely be forced to upgrade when their annual GSuite renewal comes along.

Now your options are either 30GB, 2TB or 5TB of storage per user, unless you upgrade to their enterprise tiers, which obviously means more money.

There is also an Enterprise plan which pricing isn’t advertised for. This is currently $20 per user per month, or $30 for Enterprise Plus, and to get to these plans you'll need to upgrade first to either Starter, Standard or Plus - then upgrade within your browser as you don't need to contact Google like their website states.

So what are these new plans, and how do they differ to what was on offer before? Google state that Workspace introduces three major developments. A new brand identity, new ways to get started, and a new, deeply integrated user experience,

A new brand Identity, well - whopdedoo they now have new style logos for many of their Apps, which look clean, but not exactly reasons to tip this whole service up in the air.

New ways to get started. Basically Googles explanation for 'We changed all our packages and now you need to sign up for one of our new packages'. Again, no real reason to re-brand the whole service here.

Then finally, their New, Deeply integrated user experience. This is where all of the filling is to that delicious Google Sandwich of services.

After reading their blog post all about these changes - I have to admit, my first thought was - Oh cool, they're finally doing what Microsoft have been doing for the last decade! Congrats Google!

Features like Chat and Rooms which, kind of mirror Microsoft Teams in a way, where you can message your colleagues and collaborate on documents together. One thing that did excite me was the ability to collaborate with external guests, something that Microsoft Teams is notoriously bad for and required you to essentially sign out from your own companies channels and therefore miss any notifications that come through in the meantime.

So this does look like an interesting feature. But I'm curious as to how well this works in real life, as whilst I'm an advocate of getting rid of locally installed applications, there are some apps that I'd like to keep separate.

Have you ever been that guy, or girl, who has tonnes of tabs open and then have to click through them all to find that you missed a notification from 2 hours ago?

Some other arguably minor new features are that you can now preview a linked file without opening it up in a new tab, and when you @mention someone, a smart chip will show contact details to give you quick access to contacting them via email, chat or video.

You can also now start Google Meet video chats from within Docs, Sheets, Slides, Gmail and Chat - so you don't have to leave what you are doing to start a video chat.

All of these of course are nice feature additions, but I'm still not seeing anything groundbreaking that really makes sense for the whole rebrand. Once again, I feel this is actually just the standard practice of Google for changing their minds constantly on their products - which doesn't make it easy as the consumer.

With that said and according to their own blog post, these new features are available to all paying customers of Google Workspace. So I'm taking that as the existing GSuite users will not get any of these new features unless they upgrade to one of the new plans.

Oh dear god what have they done here....

Yet another change to the GSuite / Google Workspaces update, is user numbers. Previously on GSuite, you could subscribe to any tier for an unlimited number of users.

In the new Google Workspace you are now limited to 300 users on their 3 lower tiers, forcing you to upgrade to their Enterprise plans. But at $20 a pop, that's a significant increase in monthly cost for those with over 300 users. For a company with 301 users, that puts you in at nearly $5k extra PER MONTH if you were previously on the GSuite Business plan.

For those of you on the G Suite Business plan, which I'd argue the majority of GSuite users are on with that Unlimited storage and most of the G Suite features....

You lose Advanced Room & Resource Management from all 3 Workspace Tiers.

Google Vault is now available in only the Business Plus - which costs you more.

Data Regions are no longer available on any Google Workspace plan unless you pay the premium for Enterprise Plus.

Google Drive - You'll be needing the Business Plus tier if you want to completely disable external sharing for your staff for security purposes.

So, after all of this, which, let's face it - seems pretty negative to me. What does this all mean?

Google has essentially taken features away from people unless they upgrade, paying more to receive those same features back again, and even then some aren't included unless you upgrade to Enterprise - which is a significant increase in price.

BUT - if you forget all the history here. Put away the emotional breakup as if Google just swiped left on you, and take a look at the rest of the fish in the sea. Nobody else is really looking that pretty. IF you are looking from the perspective of wanting the best bang for your buck when it comes to online storage.

Microsoft gives you 1TB at most.

Dropbox and Box.com both offer Unlimited storage, but at over double the cost of Google Workspace.

Amazon offer up to 30TB of storage space, but at a significant price. And well, nobody else seems to really come close still.

So it makes me wonder - Did Google realise this and just decide to suddenly become a lot more profitable?

After all of this, what does it mean to everybody who has watched my best online cloud storage provider video comparison or the best cloud storage for Photos and video's?

Well, for one, Google isn't changing their Google Photo's offering that lets you store unlimited video's and photos providing they are resized to their certain formats. Check out the photo storage video in the link above to know more if you haven't already seen it.

For me - the Google Workspace tiers still offer good value since since it's still the cheapest mainstream provider offering unlimited storage. I say mainstream provider here, as I keep getting comments from people on my other video and posts that say; "But you didn't look at unlimiteddatabackupmylaptopservice.com you doofus"!

I had a horrendous experience with Box.com with one of my customers a few years back, and I wouldn't go near them for online storage. Plus they have a 2gb or 5gb file size limit... I have photo edits larger than 2Gb let alone any of my video files. No thanks.

I digress, what was I saying?

For pure storage, then I'd still go with Google, but perhaps rather than jump into the Unlimited storage tier, look at how much data you have and start with the tier that matches those needs. Then as you grow, you can upgrade.

For those wanting the best all around solution for their business in terms of applications, features and so forth, it's difficult, nigh on impossible to call between Office 365 and Google. Both have their strengths, both have their weaknesses, and both can make or break it for your business if you don't have a good enough IT Support provider to look after you.

If you have any comments or questions, get in touch or head over to my YouTube channel and drop a comment below this video. I try to respond to each and every single person who comments on my video's, so get stuck in, ask me a question if I've not covered something, tell me I'm wrong if I'm wrong but, Just be nice about it ok?

Thanks for reading. If you do head over to my channel, don't forget of course to like the video, subscribe if you're not already, hit the bell icon to be notified when future video's are posted and I'll see you in the comments!