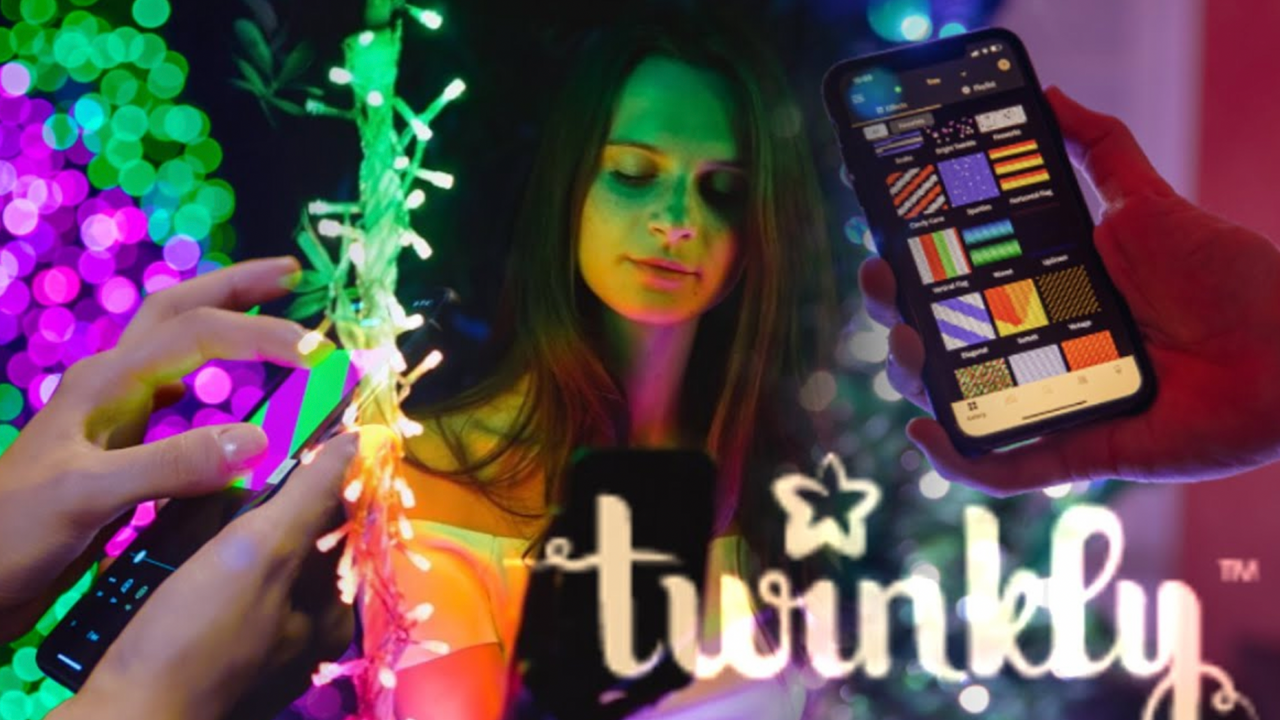 When it comes to Tech, Twinkly has some of the very best and coolest lighting products that I've ever come across. They're the first Smart LED lights made simple where you can actually control the individual LED colours across all of their lighting range - and it opens up a whole world of possibilities in terms of what you can do above say, philips hue when you can change just the overall colour, and not individual LEDs on their LED strip for example.

So I reached out and asked if I could review some of their products.

They sent out 2 of their 250 RGB LED Strings products, but with a caveat.... of... no holiday references.

This might sound a little silly given the time of year I'm making this post, and also for what I had originally planned for this post.

Now, this isn't sponsored, they haven't paid me to say this, they've just sent me these products to take a look at. Hopefully, by the end of this, I won't have ruined my chances of working with them again!

So perhaps instead of that word, I'm going to call it another word instead. Let's call it. Burger. So whenever I say BURGER, replace it with that word that I'm not allowed to reference.

Oh, wait. There's a burger tree on the front. Let's just sort that out. I really hope I don't have to send these back now... 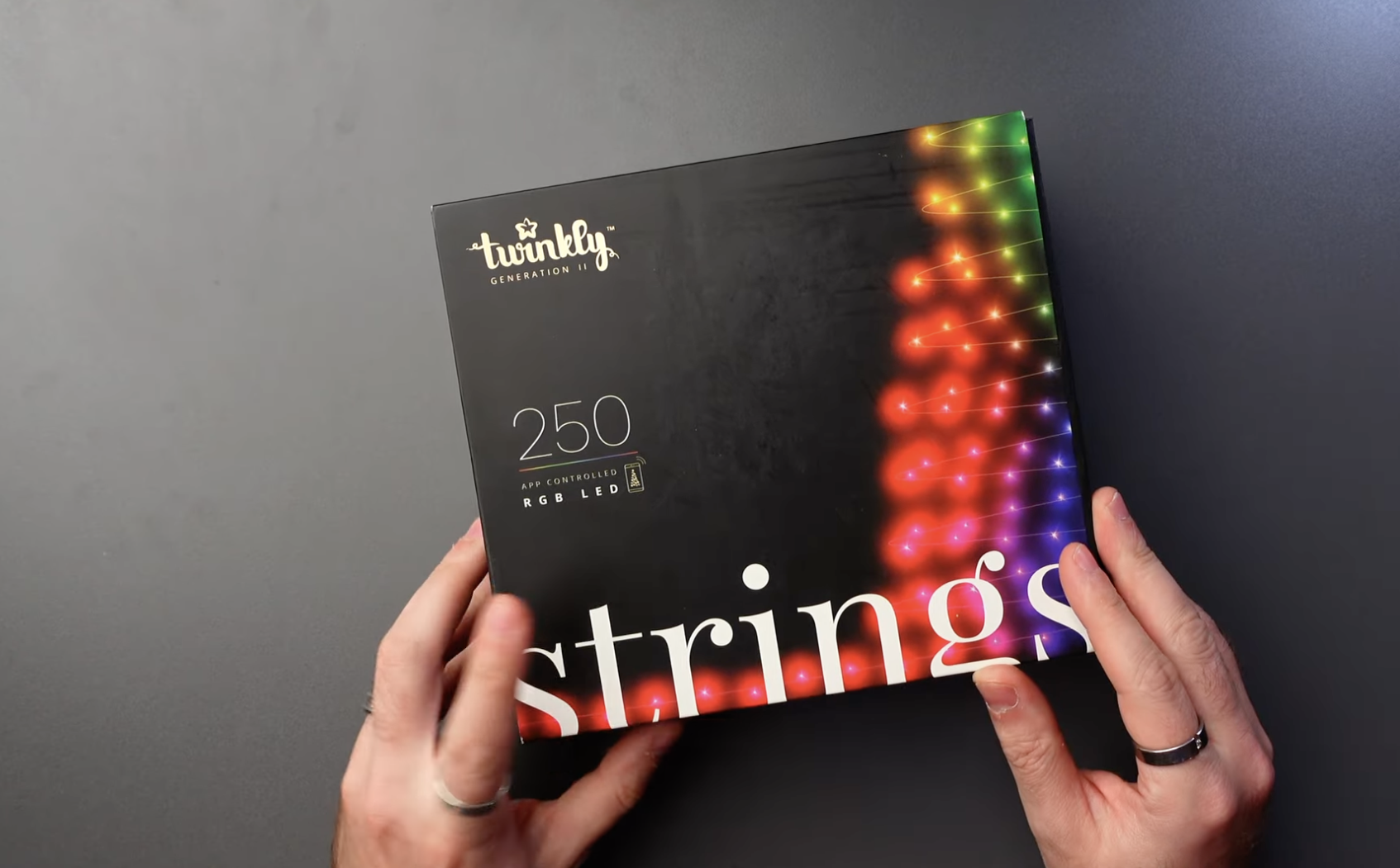 Flip it over and on the back, we have Wifi and Bluetooth control - which is honestly where the absolute magic in this product lies.

They are 20m length and there's 8cm's between LEDs. It's RGB, a mannd IP44 which means you can use these indoors and outdoors, and basically in any country unless you live in Dubai or the Antarctic. There are apps for iPhone and Android which is handy for testing on my new Google Pixel 6!

Opening the box up now and well, I've already taken the lights out, which I'll show you in a moment.

But we have some stickers. A Welcome Card... thank you Andrea. And some instructions. Which we can flick through... oops, we'll have to blur that out! Damn, they really are making this difficult for me. 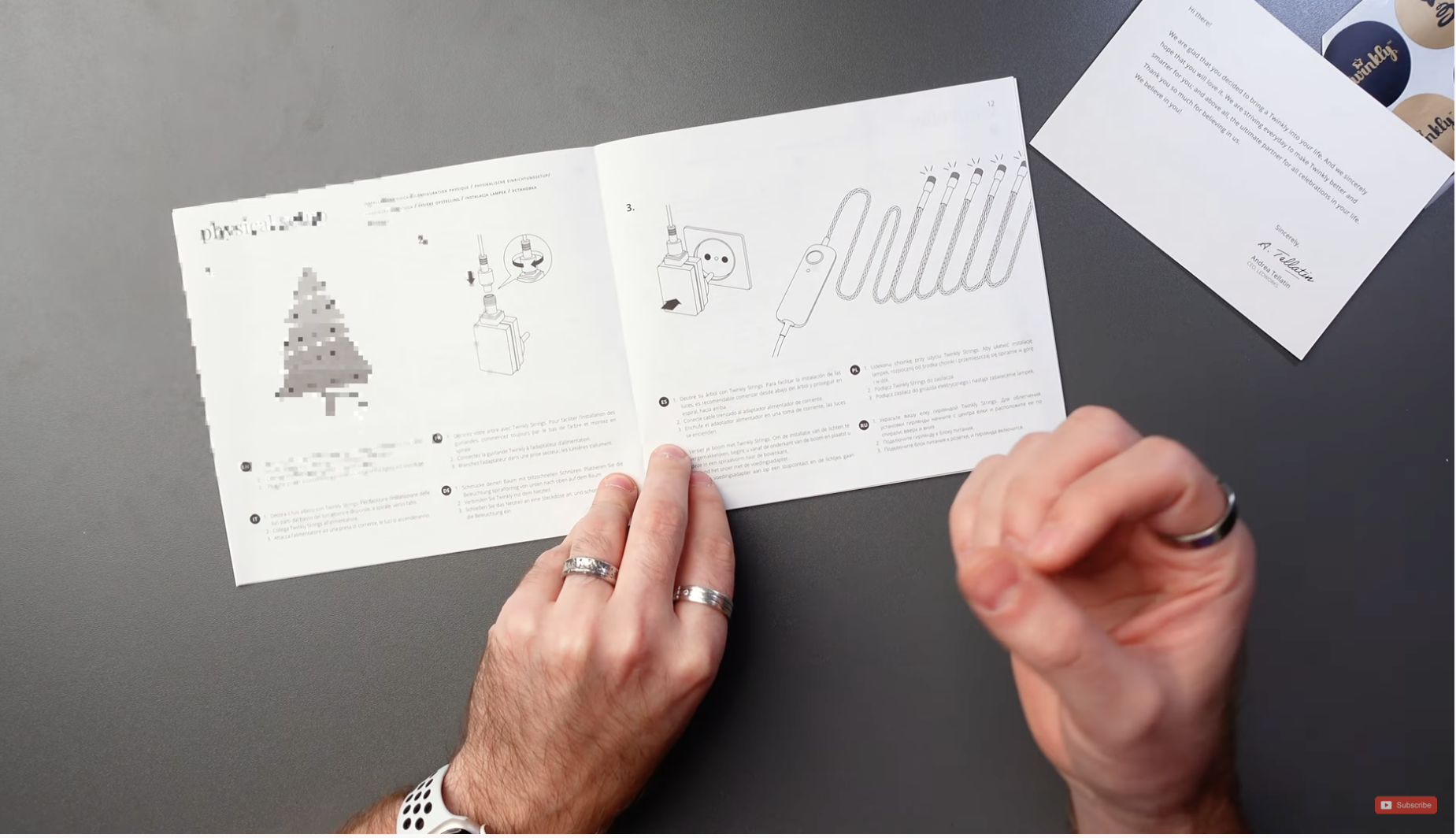 Basically, wrap them around something, and definitely not a burger tree, plug them in, and the lights will come on.

This controller part works over Bluetooth to get things set up, and then you control them via Wifi. This means you either need the lights near enough to connect to your home WiFi, or you can set them up as their own standalone networks, which you'll need to do if you wanted to hang these up maybe in your garden or down your fence or something like that.

First of all, find a plug socket that's near to something you want to light up. Plug them in, and then hang the lights up.

Depending on the effects you want you might want the LEDs really close together or far apart - totally up to you.

Next, you can combine two sets of lights and intertwine them, because these lights have a really cool thing where you can actually group them together. Either mixed together or having them in separate places.

Once you've got them mounted, you take your phone out and now you can map the LED's. Simply hold your phone up and the lights will flash and I just think this part is the coolest. 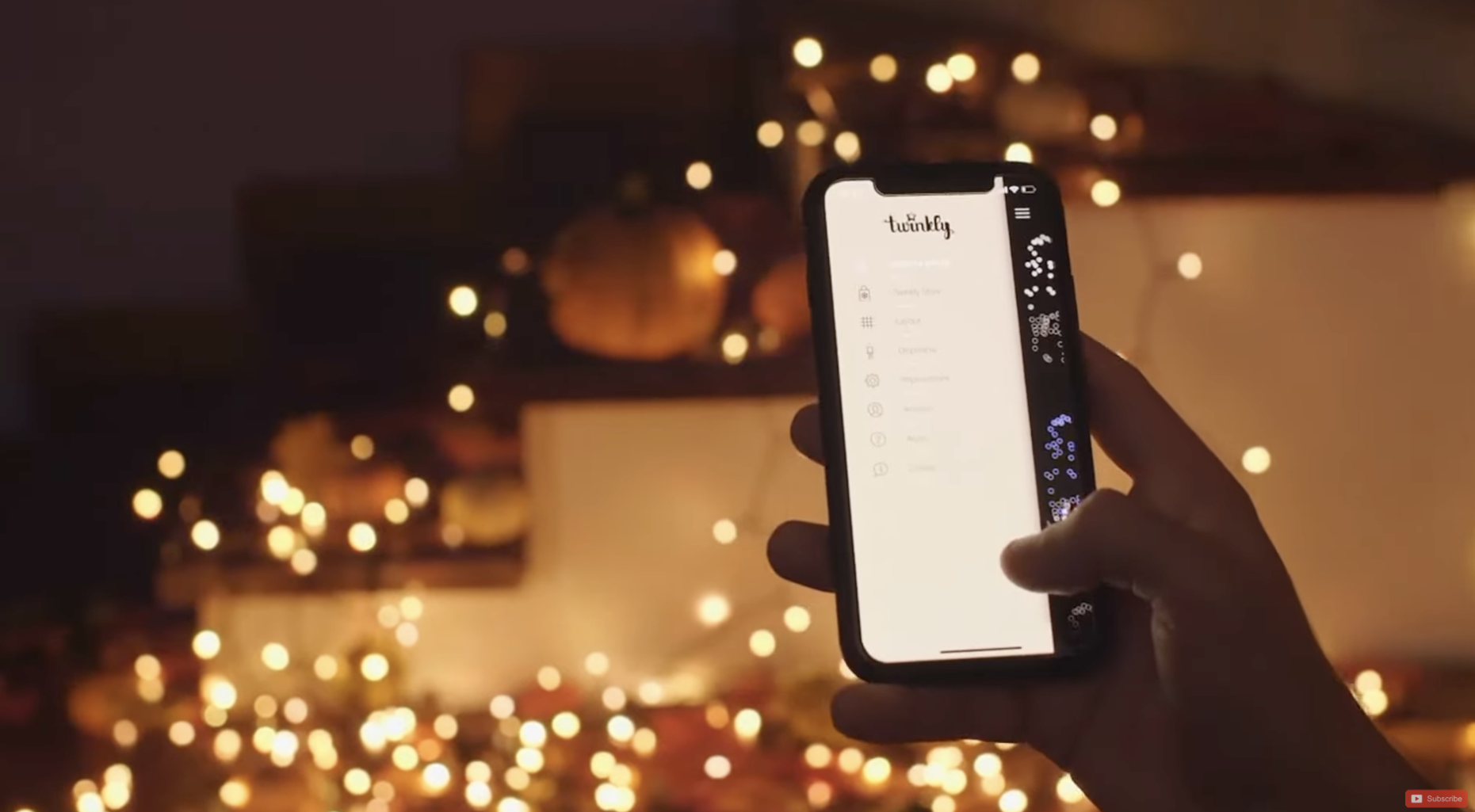 The LED's themselves will then turn green once it's confident that it knows where the LED's are.

If it can't see the LED's, they'll be red. Therefore you can scan again, and scan again - and in turn, those red LED's will turn amber, and finally green. Until it has a total map of where all the LED's are.

Because it now knows where all of the LED's are, you can do some really cool effects with them.

You can even draw something with your finger and literally draw onto the canvas of LED's that you've just created - that's so cool! 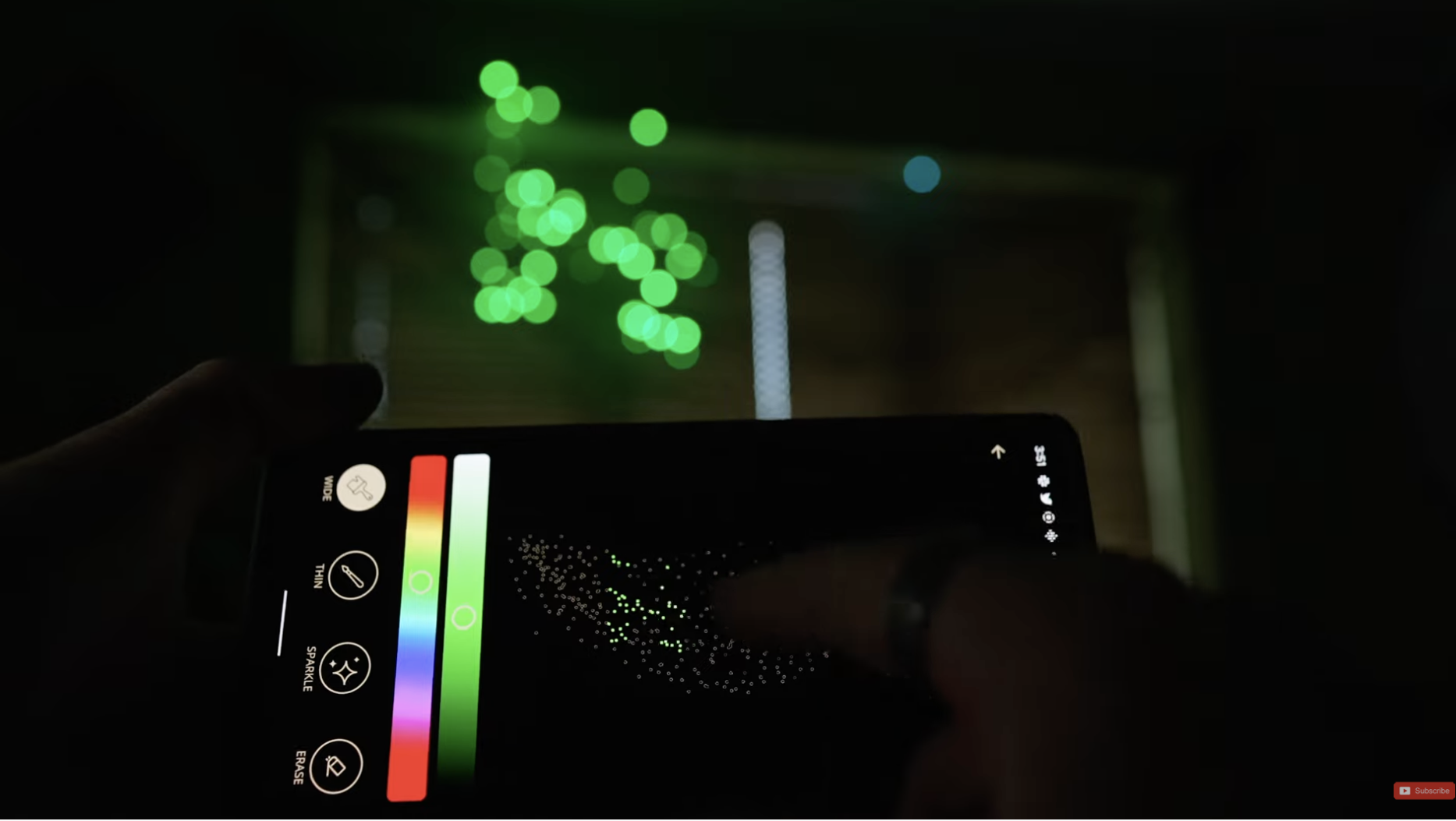 There are even some effects like errr... Snow. That's a safe word to say right?

Bat Signal? That's safe! And that looks quite cool as long as the LED's really are lined up properly.

But, joking aside, these lights are really cool. I absolutely love them, and I really hope I'm allowed to keep them because I haven't even asked about that yet.

Oh also, for the home automation geeks amongst us, these lights DO integrate with platforms like Home Assistant, so you can trigger all forms of home automation fun too.

If you want to get your hands on your very own then just follow the links down below, they're available pretty much worldwide - and it's not just these lights I'm reviewing today. They make all sorts of different styles, some I was hoping to get my hands on for this review to deck my house out in err, burger decorations.

But otherwise, thank you for reading - I hope you have a really great, errr, Burger.

Twinkly, I hope you liked this post. Please don't fire me.

And I'll see you in the next video on my YouTube channel!

Get your @Twinkly Lights: https://geni.us/pZ8uPXJ